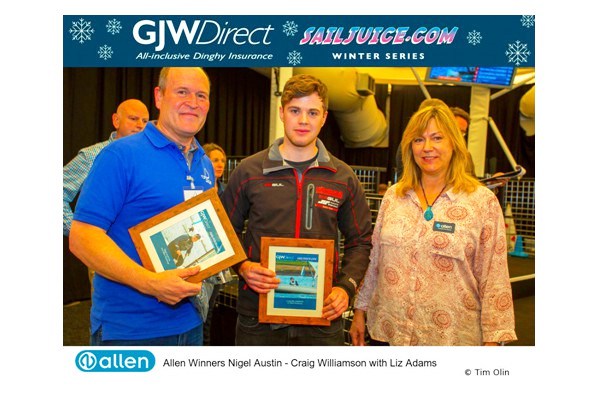 Following on from the success of the “Allen Most Improved Award” in 2016-7, Allen Brothers has increased its level of support for the programme and the upgraded award will be in place throughout the Allen supported Winter Series and into the 2018 sailing season.
The award will now be named the “Allen Performance Challenge” and is open to anyone carrying Allen branding on their boat. The challenge will be running at all Allen sponsored events with a £50 Allen voucher up for grabs by the competitor who’s results improve the most throughout the course of the event. There will also be an overall winner of the Allen Performance Challenge for the sailor who improves the most through the season, The award will be presented at the 2019 Dinghy Boat Show in London.
In 2017 the award was run at several Allen sponsored events for classes such as the Enterprise, 505, Supernova and RS Feva fleets. Allen Brothers also ran the event during the course of the 2016/17 Winter Series, with the overall title being awarded to Laser sailor Craig Williamson at the 2017 Dinghy Show.
Allen Brothers Managing Director, Liz Adams, explained “The Allen Performance Challenge is designed to award the efforts of the sailors who may not necessarily finish up on the podium. It is important to keep the sport of sailing interesting for new and young sailors as well as the competitors who have been around for a while and we feel this award is a great way to reward the weekend warriors!”