Completing the ARC at age 16 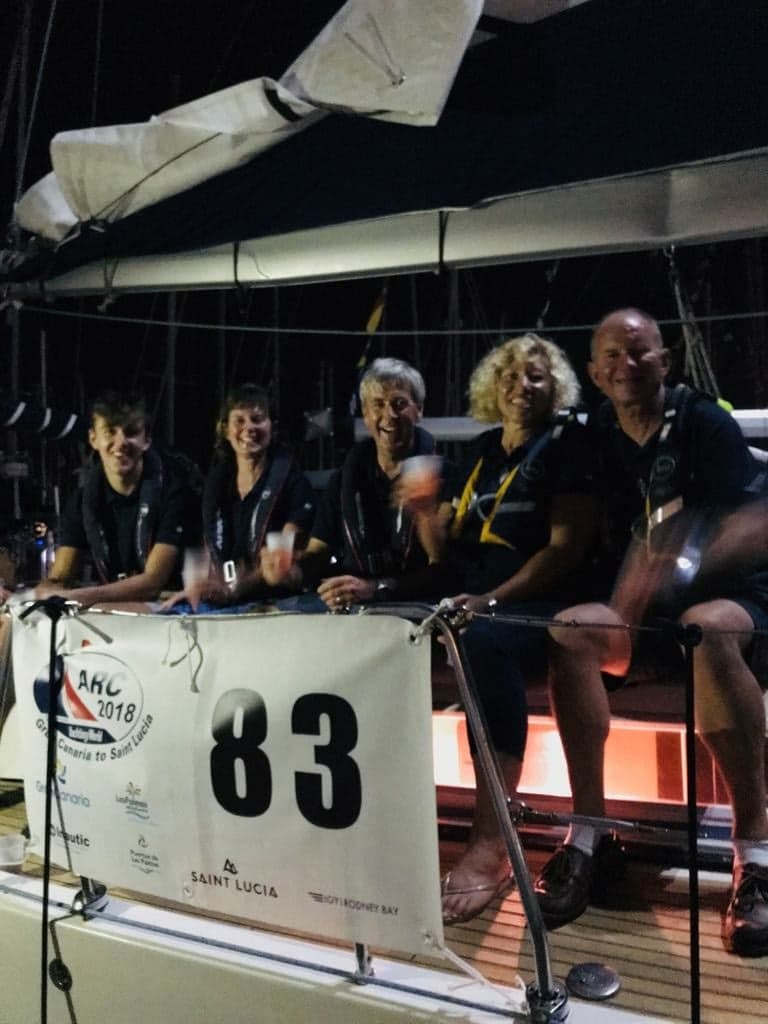 Here is his review of their 17 day trip…

Crossing the Atlantic Ocean was a truly incredible experience and one which I will never forget. It is impossible to understand what it is like to be at sea for 17 days without the sight of land. However, don’t be fooled the crossing is one full of many surprises and hiccups…

I landed in the Canary Islands to the perfect temperature of just over 20°C, the few days I had in the Canary Islands was packed with demonstrations for example, helicopter rescues and how to use flares. We had to prep the boat for the crossing with food and a plentiful supply of fuel. We had many parties over these few days and a great time enjoying ourselves before the race started.

Nerves started to rise the morning of the start to the ARC. All around us we we could see people saying their good byes. We started to head out to the start area at 11o’clock and started to prepare ourselves for by hoisting up the cruising Shute. At 1 o’clock my Uncle John, Auntie Sue, Mum, Dad and I embarked on the Atlantic Rally for Cruisers race.  It was a spectacle in its self to see the start of the ARC. There were hundreds of boats all starting at the same time between a buoy and a warship.

We started the race with a flying start putting Jack, our boat, right up to front of the fleet alongside racing catamarans and mono-hulls. We were heading south in order to stay with the breeze as Jack is a heavy boat and needs plenty of wind to sail fast.

We had been pushing very hard in the first couple of days however, disaster struck at 2am on the 4th day. We were putting a reef in the mainsail when we had an accidental crash gybe. Unfortunately, the crash gybe left a large bend in the boom. This was very significant because if the boom was to break, we would be left with a very big problem on our hands. We managed to tie a rope from the end of the boom to the stern of the boat, Stopping the boom being able to bend any further.

Sadly this damage meant we had to sail permanently with 1-2 reefs for the rest of the race as we did not want to risk any further damage to the boom. After this incident our average speed decreased hugely. I guess there is one advantage of having a smaller main size. It meant that my school work and mock exams were a little easier to do as the boat wasn’t rocking and rolling as much!

I am delighted to say that I managed to complete at least 5 hours of school work each day whilst we cruised along. I also managed to complete nearly all of my mock exam papers. Having now got my results back I’m happy to see the large Atlantic waves didn’t affect my studying too badly!

The waves were incredible, when the breeze picked up, some where as big as a house! The waves were one of the coolest things to experience in our crossing. As Jack would reach the crest of a wave, we would then take off and surf down the face of these massive waves into the back of the next one.

About half way across the Atlantic we had a wave a bit larger than normal which broke over the hull. Due to the very hot weather, we had been leaving the hatches open. My Uncle was asleep in his cabin and I was studying. The water poured into his cabin soaking him, his bed, his clothes and everything else in his cabin. All of a sudden, he came marching out of his cabin, very disgruntled about the fact he was covered in water. We were all in dying of laughter. I was very lucky because the hatch above me was closed so all my chemistry work was saved.

When crossing the Atlantic we had the most amazing experiences. Several times we had pods of dolphins swimming alongside us, it was absolutely incredible watching them dive out of the water in a group. During the crossing Uncle John and I had a fishing competition. He had a proper sea fishing rod and I had what looked like a big crabbing line. Ironically, I managed to win by a country mile, catching 7 fish. However, I only managed to land 4. One of those included a giant 12kg tuna which I hand pulled in while cruising along at 8 knots. Whereas Uncle John only manged to catch 2 fish. The Tuna and the Mahi Mahi tasted delicious. On the subject of fish, there was several occasions when we would get attacked by flying fish. These tiny fish jump and fly out of the water to get away from predators and seem to end up on deck as they have no sense of flying direction.

The sunsets and sunrises were out of this world and the most beautiful thing you could ever see. The sky lit up into this bright foray of colour. I will never forget staring at the sunset when listening to music. There was something so peaceful about watching the sunset even when you are 1,500 miles away from the nearest land. When the sun went down, there was no light pollution you get from the lights in a town or city, so it was pitch black. However, this left the sky and the stars. It was nothing like I have ever seen before. It was like the photos you see in very rural places like in the mountains. The whole of the universe lit up the sky and it was the most mesmerising thing. Just sitting there at the helm watching the stars allows you to think, reflect, realise and be grateful. Some people may think of it as worrying or lonely, but I felt fulfilled and at home rolling over the waves of the Atlantic thousands of miles from home.

Towards the end of the race another breakage occurred as we managed to bend the end of the spinnaker pole. We had to flip the pole around and use a rope to keep the sail attached to the pole which was very effective. However, this wasn’t the bad break. I was doing one of my mock exam papers when I heard a loud bang. It was the spinnaker pole eyelet snapping off and leaving the pole smashing against the deck and the jib frantically flapping. I paused the exam time and dashed up onto deck to help the situation. Unfortunately, the damage to the pole was not repairable with the resources we had. This then meant we had to sail dead downwind to finish with only one sail making the last few days particularly painful due to our very slow speed.

There was nothing we could do as a boat called Theodora who we had been right next to the whole trip could then just fly ahead of us, at least it meant that I can enjoy the emptiness of the Atlantic a little longer.

During our very slow sail to the finish we all had very high spirits even though we were exhausted. At the same time, we were also sad that the race had gone so quickly because when sailing across the Atlantic you lose track of all-time frames and all the days seem to merge together. We caught sight of land just before sunset and we managed to watch our final sunset fall behind the island of St Lucia which was incredible.

We finished the ARC in 17 days and 10 hours having travelled 2,900 nautical miles. We were greeted by horns, cheers from other competitors and a party which we were very much looking forward to. As soon as we docked, we were greeted with rum punch which tasted delicious. We then went straight onto land which felt very weird as I felt very off balance and wobbly, we soon headed to a restaurant to get a well-earned pizza!

We had a fun 5 days in St Lucia full of, partying, swimming, snorkelling, free diving, tours, zip lining and having fun with the locals. Overall the ARC was such an incredible experience which I loved so much, it was an experience that I will never forget, and I look forward to when I race again in 2021 when my Dad plans to take our boat, the year I finish at New Hall. It was a life changing experience.