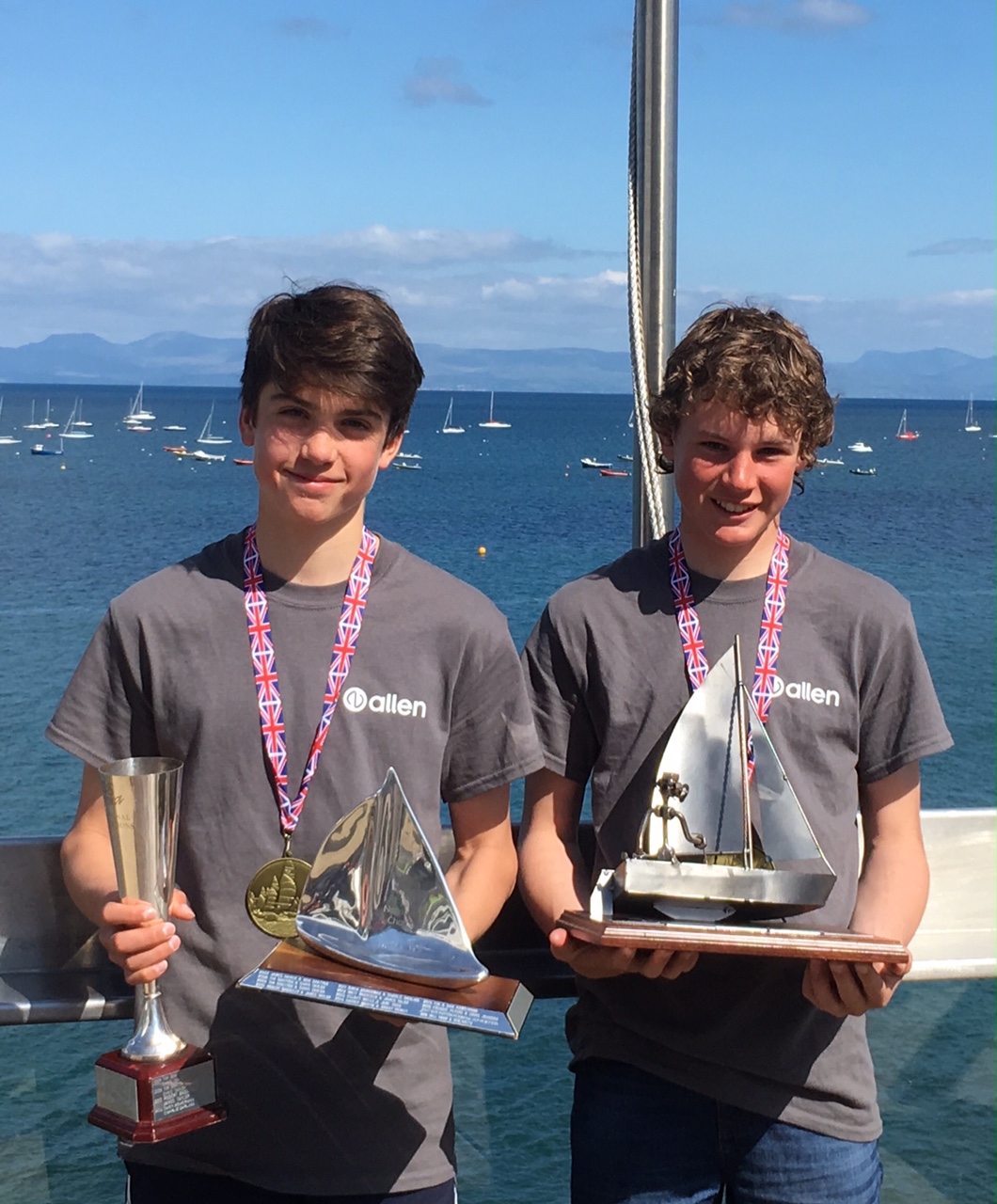 The RS Feva fleet headed to South Caernarvonshire Yacht Club, Abersoch, for their 2019 National Championships.  With a forecast of building winds through the 4 days of the regatta, Saturday morning was all about boat preparation and getting our heads in the right place for 4 days of the challenging racing the venue is known for.

We launched late morning with the aim of getting 3 races in on the day.  The winds were lighter and shiftier than expected, with a little bit of chop but no large swell.  With the 94 boat fleet split into 2 flights we were in the first start and headed right up the first beat rounding the windward mark in about 10th.  After a lot of place changing, both up and down, we had a strong second beat ensuring we started the regatta with a safe 8th position.  For the second and third races the fleet was getting more aggressive on the start line, we managed to avoid any black flags and posted a 7th and 4th to finish the day comfortably placed in 7th overall.

Day 2 dawned and the predicted wind had arrived.  Start time was earlier and the beach was busy with sailors ensuring their boats were properly set up for a tough days racing.  On the water the chop had increased with a 15kt to 20kt steady North Westerly providing some testing conditions.  We set our stall out early with a great pin end start in the first race, getting to the windward mark in 2nd before taking the lead on the first downwind.  Once ahead we increased our lead to the finish to get our first bullet of the championship.  Race 2 followed a similar pattern, but we were caught out by the wind dropping on the final run allowing the boat behind to ride a gust past us to the finish, with us a close 2nd.  The wind dropped further for race 3, although the odd big gust was still around to keep the fleet on its toes.  After another good start we led all the way to the last mark, just losing out with a poor rounding to finish 2nd.  These were the final races of the qualification series and posting a 1,2,2 for the day was enough to go into gold fleet leading the championship.

The following morning the nerves were beginning to show as we prepared to launch wearing the gold championship leaders race bibs.  This was probably the most pressure I have felt at an event, knowing that all the other teams would be looking for us and wanting the no 1 spot for themselves.  Our nerves were temporarily calmed after another good pin end start in the first race, unfortunately after tacking to cross the fleet we capsized and found ourselves back in about 30th at the windward mark.  At this point we felt we had nothing to lose and with great boat speed both down and upwind we clawed ourselves back to 10th at the finish.  We knew we needed a good result in the next race if we were going to be in contention for the overall win, and after winning the pin end again we made no mistakes posting a bullet by some distance.  We carried this form into the last race of the day finishing 2nd leaving us 1st overall overnight with a discard still to come.

Waking up on the final day the nerves were in full flight as we were coming to terms with having the opportunity to win the event.  Our Squiddies coaches were great in calming us down before racing and we began to feel a lot calmer once we launched.  Conditions were even windier than previous days but, with the waves, were great fun and really suited our style of sailing.  Our biggest concerns were black flags, protests and gear failure but we kept ourselves out of trouble, the boat stayed strong (thank you Allen for providing the fittings) and we put our nerves behind us to close out the championship with a 1,1,1 scoreline for the day.

Overall, we really enjoyed the regatta and the SCYC were fantastic hosts.  Terry and I worked really well together as a team and this definitely contributed to our win.  Next event for us is the Inlands at Rutland at the end of June before the Worlds in Italy in July.