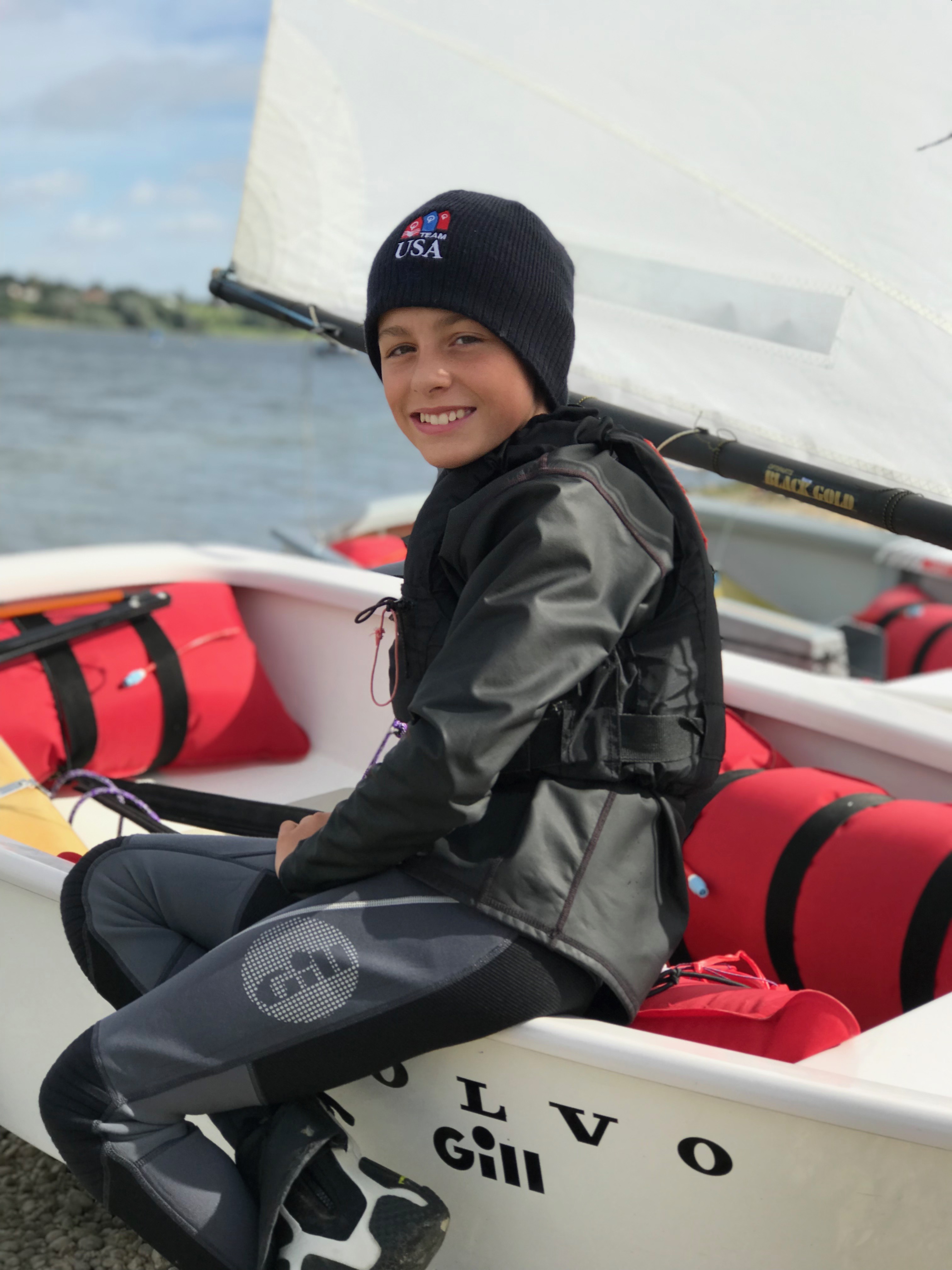 I picked up the Allen Academy optimist on my way home from the Magic Marine Easter Regatta in Braassemermeer. I was very excited and super happy to have been picked to sail the optimist this season.

As soon as we got home, I went sailing in it at my local club and it felt great. I went to a few local travellers’ events to get used to the boat before getting ready to sail in the first ranking event of the season, which was the Inland Championships at Grafham Water. I decided that I wanted a new sail for my weight, as I had been sailing with OneSails before I got the Allen boat, so was very happy to receive a OneSail Light from OneSails UK. I was excited to be going to race in a big fleet with the new sail and boat. Unfortunately, when we got there, there was no wind for the entire weekend, so no races were sailed at all! Everyone was very disappointed, especially me!

Next chance for big fleet racing was the Oppi Nationals at Weymouth and Portland National Sailing Academy. I was looking forward to this whole week of racing. I was a bit disappointed with my results overall for the Nationals. I made gold fleet, but I felt that I wasn’t sailing as fast as usual. It was very windy most days, and I struggled to flatten my boat in the gusts, and the boat kept stalling in the choppy conditions. This regatta left me wondering what was wrong with my sailing, and I had lots of chats with other sailors, parents and coaches about what could have been the problem.

Next up was the Irish Optimist Nationals in Howth, which I travelled to as part of the junior GBR team. I decided to take my old boat to this event, just to see if there was a difference in my boat speed. This was another very windy regatta, with a couple of days spent ashore due to the high winds. However, the days that I did sail, I felt a bit better than at the British Nationals, but I still struggled in the heavy gusts to keep my boat flat.

When we came home, after more discussions with lots of oppi parents and sailors, we decided that a new flexible rig in the Allen boat would be a good thing to try. So, I was very lucky to be able to get a BlackGold Flexi rig from Xtremity. It arrived just in time for the Late Summer Championships at Draycote Water Sailing Club, the second ranker of the season.

Another windy regatta! I felt really confident and good about going sailing on the first day, even though it was very windy with big gusts coming through. The first day I sailed really well and managed to keep my boat flat in the gusts, I could see my rig flexing as I kept on sailing. I managed to get a 3rd and a 6th on the first day, but I also got a black flag which meant my discard was gone. The second day didn’t go as well, I started with a 13th and then the race after that I capsized, then in the final race I was still thinking about my capsize so wasn’t concentrating and ended up with a 33rd. I knew that I could sail fast and do well with the new set up on the boat, so I focussed on those positives.

The final ranking event of the season was End of Seasons at Weymouth. I had left myself with a lot of hard work to do. I needed to do really well at this event so that I made one of the Winter squads. I had been in IOCA squad last winter, so I wanted to go into a higher squad for this winter.

I thought it would be a good idea to do the IOCA pre-event training the week before at Weymouth to give me a good chance of doing well for the End of Seasons. It was a super windy weekend again, but I had a great weekend of training and really got used to the new set up on the boat. I was feeling ok about the following week – apart from the 6-hour drive both ways to get there!

The first day of End of Seasons was raining like crazy, so we all rigged up in the hanger and put our rigs in the rig stands to wait for launch. I was feeling really good about my BlackGold lite spars and my OneSail light, and spent quite a bit of time setting up my rig. We launched in quite light wind, with the race area in about 3 and 12 knots of breeze. The first race I finished 11th, which was ok, but not good enough – I needed to do better! So, I made some adjustments and set up my rig again before the next races. I got a 3rd and then a 5th, so it ended up as a great day on the water.

The forecast for the second day was for too much wind, so we were postponed for a bit to start with, but then we were told to get ready to launch, so we went sailing whilst the wind was about 25 knots. It must have got up to about 35 knots when we were sailing out to the race area – it was so windy! Just before the start, it dropped to about 15-26 knots. I was still feeling great about my BlackGold lite spars and OneSail light, and I could see my rig flexing in the gusts. I had also depowered by de-spriting my rig which helped a lot. We only managed 1 race before the wind really picked up and we were sent to shore. I got a 9th in that race, which I was really happy with. I finished 8th overall and 2nd junior.

I was really hoping from my great EoS results, and my not so good LSC result, that I would get a squad invitation. So, I was really happy when I got the invite to join National Squad for the Winter!

I’m looking forward to a great Winter of training with my new squad, with some of my friends. The pressure is off now for a while. The next event is the Winter Championships at Datchet, which is always great fun and I’m excited to race, now that I’ve got the boat really sailing fast for me and the set up is really great!