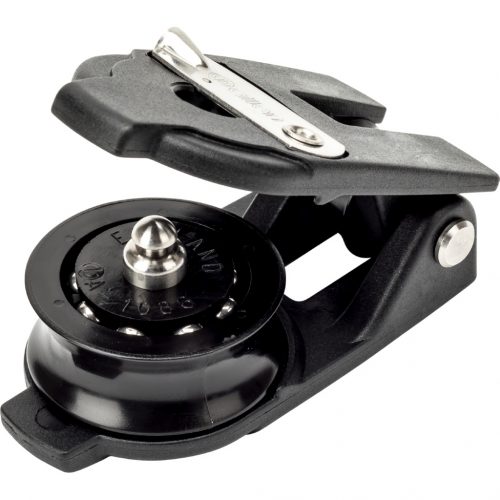 A snatch block is a variation of pulley that has been designed to allow quick attaching and releasing of lines.

They work by having an opening mechanism for the side cheek, there are several different styles available on the market, but our range comes with a simple hinge mechanism that allows the side cheek to open a bit like the famous gull-wing car door or an oyster shell.

Our snatch block range is available with either a 30 or 40mm sheave, both of which feature the Allen dynamic bearing technology. Two rows of stainless-steel ball bearings running on a stainless-steel axle.

Our smallest snatch block, A4475, comes without a locking mechanism for the opening side cheek. Instead, it stays closed by clicking into place once pushed shut. When the A4475 becomes loaded, friction on the opening mechanism and central pin will increase. This added friction stops the cheek from being able to open. However, it can be forced open manually, either with a rigging spike or by using the leverage available with the small tabs on the bottom of the cheeks. This same mechanism is also available in the 40mm version.

The larger snatch block A1375 is available with a lock. The locking plate is spring-loaded and clips into place on the central pin where there is a small recess. This mechanism gives extra security for the larger loads that are expected of the 40mm sheave.

The range is available with a variety of different attachments to suit a wide range of applications. Generally, snatch blocks are utilised in barber haulier or spinnaker sheet systems on a boat, where you may want to quickly attach or release the block. However, they are also widely used in non-marine sectors such as theatre production, tree surgery and cargo transportation.