What % chance would you give the confluence of all the right factors coming together to make an epic open meeting, in this strangest of seasons?

A great venue, manageable restrictions, perfect wind, sun, and the hope of a beer on the terrace? Low odds, especially the wind bit, as so far this year every weekend has been all or nothing. So it was for the 2nd Allen headlined Contender TT of the year at Castle Cove. Forecasts predicted light breeze, but such is the clamour for competitive racing that 28 boats made a considerable investment in nothing but hope; One even came from Scotland to add to the finger crossing.

Early morning arrivals noted the no wind, mirror like finish to Portland harbour, but were compensated by the hospitality of Castle Cove welcoming party of volunteers. As racing closed in, the beginnings of a sea breeze looked possible in the glorious sunshine. The RO backed that up with staunch confidence in a good day’s racing that proved to be bang on.

By the time of the first starting signal, a happy 12 -14 Knot breeze had kicked in from the south but it’s desire to track to the right made start and beat strategies very simple; Close to the boat, go right in Garda like conditions.

Out of the gate clean, Simon Mussell got enough height to tack early followed by Ed Presley, these two looked nailed on until Nick Noble came out of the far-right hand corner to challenge, Mussell had just enough to get around first but rather than just do a horizon job, Simon had to work hard to keep Nick and his newfound pointing ability at bay. Ed Presley just managed to keep in front of Ben Hawkes who had made big gains on the reaches to the finish.

After the sparkle of the first race in perfect condition the 2nd looked to held in considerably less, but the sun was out, and the mustard level keenness was yet to fade. The same line bias as the dropping breeze tracked around to the SW, meant everyone wanted to be close to the RO, this combined with a watch miscalculation caused Ed Presley to start 5 second before the fleet… and the gun, leading to a sad sloping back to the line to try again. For everyone else thing progressed as designed with Nimble Stuart jones getting out to the right first and making it stick in the wind bend. Chased by Rob Smith and Nick Noble, these three attempted to stay in front of Richard franks, with his incredibly pointy, but menacing looking, pitch black sail. Jones used many decades of nouse to keep in front of Nick Noble, who has seemingly added light wind yotting to his new quiver of skills. The ever-consistent Rob Smith completed the Podium.

By the end of the race the wind was very light, the RO decided wisely to increase the bar takings by getting us all home as it continued to drop. To say the fleet enjoyed the excellent setting of the Castle Cove balcony would only scratch the surface of what a sociable evening followed.

The next day tread a similar pattern of the sailors being suspicious of the light wind, only to be greeted with a steady 13-14 knots on the course, but this time there would be no dropping. There would however be the same persistent shift to the right and subsequent line preference, at least it made the decisions easy to make, or maybe not, as the Contender threw in some general recalls just for fun before the RO took out his cane in the form of the black flag, and we all behaved.

From the committee boat end Ed Presley stayed on Starboard for longer than required but managed to time it correctly to hit the lay line just in front of Simon Mussell and a pack of others. This pack battled hard down the first reach with Graeme Wilcox getting the inside line at the wing mark in front of Ed and Simon, Graeme extended with strong reaching speed but was once again reeled in upwind. A slight understand of the windward mark by Graeme and Ed allowed Nick Noble to work through into 2nd behind Simon and attack again downwind to take the win, Graeme managed to get Simon on the final reach leaving him 3rd Infront of Ed.

A bad start in the next race forced Stuart Jones to tack immediately off the line and take sterns but in his usual casual style, came out smelling of roses to lead at the windward mark. Eventually the upwind speeds of Nick Noble and then Simon Mussell would prove too much to handle finishing in that order. The Final action of the day had Simon lead again but this time the downwind speeds of Graeme and then Stuart would prove irresistible, with Stuart making his move on the last reach to the line. Graeme took the race after being competitive all weekend.

The event was won in style by Nick noble who had shown an increase in upwind speed and no issue to report downwind, although not competing in the last race whilst we were starting with black flags, was considered risky.

Castle Cove have provided a stellar racing and hospitality in the best conditions, this was an exceptional event to kickstart competitive Contender racing once again and they have the thanks of the entire fleet for the effort that they had put in. Thanks Also to Allen for their continued support of the class.

The fleet looks very healthy after our enforced holiday with 5 or 6 new faces joining. We now look forward to the Allen Contender event at Weston sailing club on the 12/13 June. The entry to the National champs in Plymouth is also now open at https://www.mount-batten-centre.com/contender-nationals-2021/ 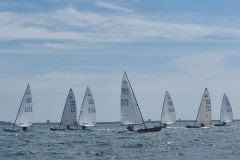 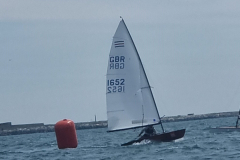 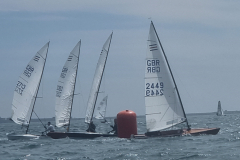 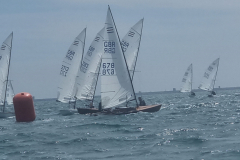 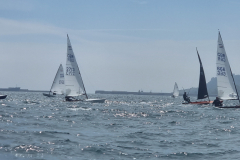 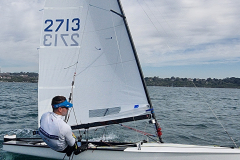 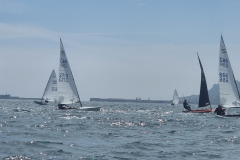