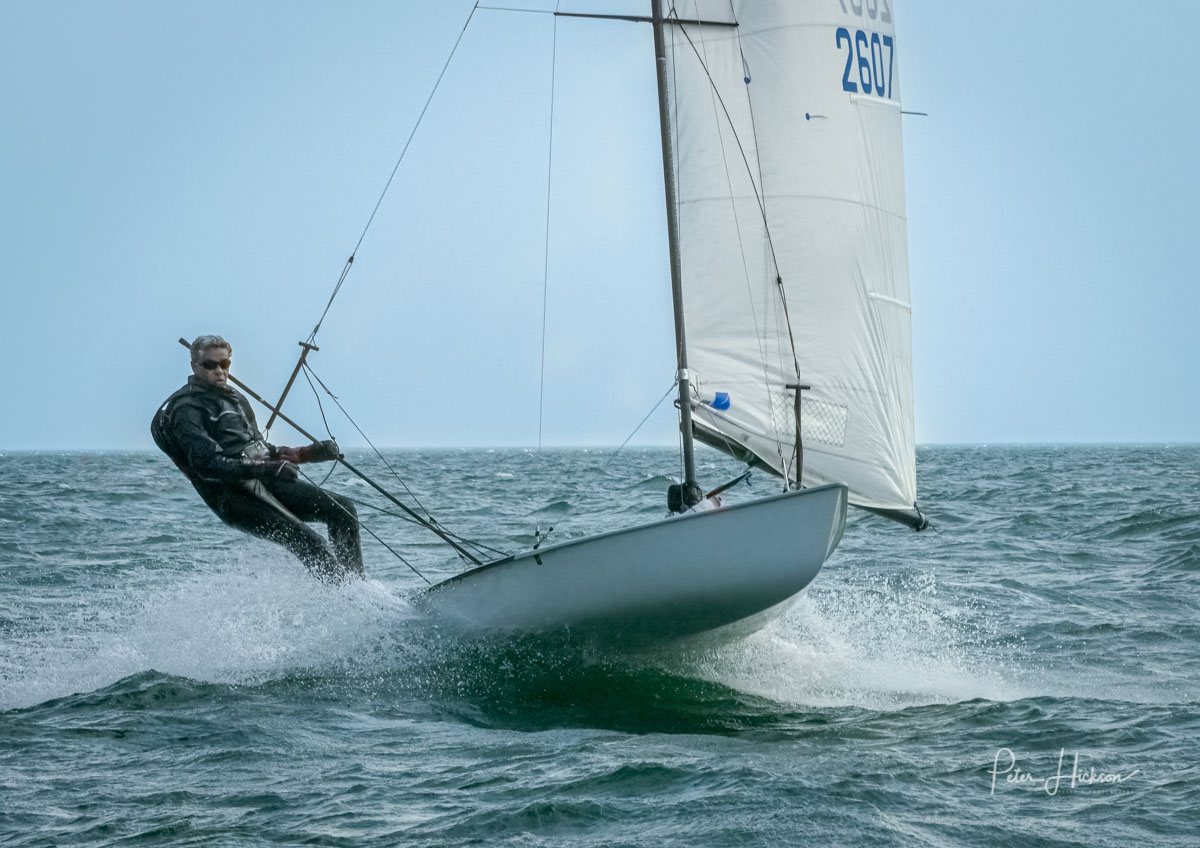 A return to Hayling Island for the Contenders is always an occasion of note, not only have they provided us with multiple World, European and Nationals events over the years, but also the conditions out in the bay are always Contender friendly.

It was then, with both excitement and trepidation that the fleet joined like minded people from the Osprey and Fireballs, the numbers of each somewhat reduced by the big forecast, but still keen to get on it.

The race officer wisely decided that 1 race on the fruiter of two fruity days was just about as much excitement as we could handle, this was confirmed on the sail out to the start line when two of the Contenders experienced catastrophic gear failure in the 25-knot breeze and tight wavelength.

The remaining group surfed out to the start area to at least give it a go. Watching the other two fleets make a capable start encouraged the Contenders to push the line hard with James Spikesley and Stuart Jones deciding that the individual flag was down to them, Stuart decided this about 5 minutes after the start, crippled by guilt no doubt.

Off the line Simon Mussell had the best lane out to the left and was the first to tack, ducking a few boats was not an issue in this weather knowing that getting successfully through the tack was worth its weight in gold. Simon was followed by Ed Presley who had managed to stay in close proximity.

Simon stayed conservative down the first reach with one foot in the boat allowing others to sail over him, once again Simon chose correctly as Ed and then Nick Noble tipped it in. This resulted in Simon having an effortless lead with Carl Tagoe attempting to chase him down.

Sure of his victory, Simon relaxed into the last reach to the finish and promptly fell out of the boat, Carl simply cruised over the line delighted with the turn of events, Ed managed to get into second before Simon could recover to 3rd. The fleet made the arduous journey into the harbour as the wind continued its escalation into madness, all of them relieved by the RO’s foresight in these matters.

Onshore life was the scene of broken bodies or broken boats, no one was immune, and many pounds were spent on new ropes or ibuprofen. Time in the bar was well earned.

Day two dawned with a much more sensible looking context, flatter water with just a knot less breeze making all the difference, the Contenders all made it out in good shape.

Another tight line appeared to favour those at the pin heading left, with Ed Presley leading this bunch, all this changed on port as the right-hand side came good allowing Stuart Jones to round with Ed but both led by Simon Mussell, this time Simon made it stick and extended to the end with Ed falling back into the pack via terrible tacking, to make an easy 2nd for Stuart. Ed still managed to retain 3rd from the dualling Nick Noble and Carl Tagoe who were joined at the hip.

The next two races suffered from a reducing breeze with some wind bends, lanes to the left would appear to look bad but tack too early and the losses were great, the best move appeared to either, go right, look good and deal with a terrible final 200 yards to the mark, or go hard left, feel awful but hang on for the superb final 200 yards into the mark on port. Either way, do not think about the middle at all.

In both races, Stuart Jones tried both extremes to good effect leading the races after the beat. A shame then that he forgot all these known knowns, on the last beat of the last race and went up the middle. After winning R3 with ease he was reduced to 3rd in  R4, allowing Simon to gratefully come through and take the race and event, Carl Tagoe picked up 2nd in both races and also took a place from Stuart to get 2nd overall.

With 3 races completed the fleet went home on a rapidly evaporating breeze to pack up in the sunshine. With a challenging forecast, it was HISC’s excellent race management that allowed us to run a successful open and finally sail in heavy air for the first time since 2019. Having shaken the kit down the Contender’s head to Castle Cove on the 7/8th May.

The Contender Nationals will be held on 2-5th June at Brightlingsea SC please see here for entries – http://contender-fireball-nationals-22.sailbrightlingsea.com/