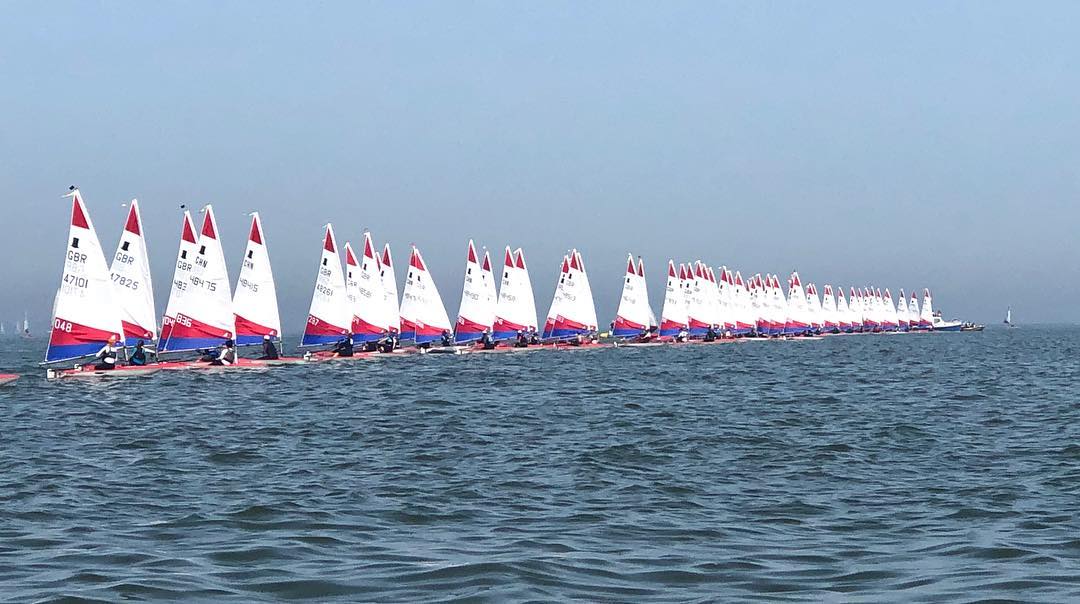 It was a great start to the Topper World Championships with the sun shining and the wind blowing in Medemblik in The Netherlands. With a steady force 5, gusting force 6 the 162 sailors in the full (5.3) rigs and 47 in the 4.2 fleets set sail, with the offshore wind giving all of us a long run to the start line. Conditions were tough but I got out off the line fast claiming my first win in the first race. This was followed by a 4th and a 3rd in the next two races and I ended the first day 2nd overall. The perfect start in the great conditions.

On the second day, the wind dropped, and we had to wait five hours for the sea breeze to fill in. Unfortunately, it didn’t give me the conditions I wanted but the race officer got the first flight away and I came in 29th after a big shift and the second flight’s race was abandoned altogether. The race officer then reset the course, but only managed to get one race in for the second flight, so we ended the day with one race completed and I moved down to 3rd overall.

Day 3, the last for qualifying, and we again had a postponement while waiting for the sea breeze to kick in. The conditions were very hot (35ºC) but we got three races away. The first was completed in light and shifty conditions, the second finally had a more consistent breeze meaning I pegged a 9th place, and the third, after some hard work on the line, resulted in me getting an unhelpful UFD.

At the end of the 3 days of qualifying, I hit 15th place overall which was perfect to go straight into the Gold fleet, and two days of World Championship racing against 80 other qualifiers.

Thursday, day 4, and the hottest day of the year. The day I’d be waiting for. I started the World Championship series in Gold Fleet with 15 points. The heatwave battled against the prevailing wind causing a 1-hour delay followed by a very light wind race with the wind almost dying completely at the end. Not great conditions for racing and I placed a respectable 10th before the race officer ordered the safety fleet to tow all 209 sailors ashore as the wind died completely. Quite a sight, everyone was frustrated, but in my case, I just wanted to get back out and race.

After 4 hours ashore we relaunched, with my hope being that a late thermal wind would establish. Sailors were towed out and the second race got underway with light and fickle conditions to contend with. The first start became a general recall, and the second start saw a dozen boats black flagged, but, finally, the race was underway! An awesome feeling, but it was short-lived as the wind dies again and the race officer abandoned the second race with everyone being towed ashore again.

On Friday we hit the boat park early, and there was a feeling of immediate excitement because the wind was finally blowing. We had an early 8am briefing as the race officer brought proceedings forward to get the races in, however halfway through the launch sequence, the wind dropped, meaning the sailors (particularly the 4.2s which had launched first) were unable to make it to the start. The decision was made to send the sailors back, resulting in confusion on the slipway with sailors trying to launch as others were trying to return.

Once we restarted it was light and choppy, making it hard to get good boat speed off the congested line which resulted in lots of general recalls and back flags. Not perfect but I had a great first race with a 5th place in an 8 to 10 knot breeze. The heatwave then began to take hold with the wind starting to die, and the chop still making things challenging on the water. The result being a tough final two races after a long week of stop & start. I eventually nailed a 14th place out of 209 & using my discard landed 7th place overall.

Looking back from the comfort of the ferry on the way back from Medemblik it was a great week, with good friends. The first day was excellent, but light winds for the rest of the week it made for challenging racing, especially when you’re 15 and heavier than some of the smaller helms in the fleet. Next up is the ITCA Nationals in Largs at the start of August – a place not known for light winds, and I can’t wait to get back out on the water.

Thanks to Allen for providing me with the best kit for my Topper!