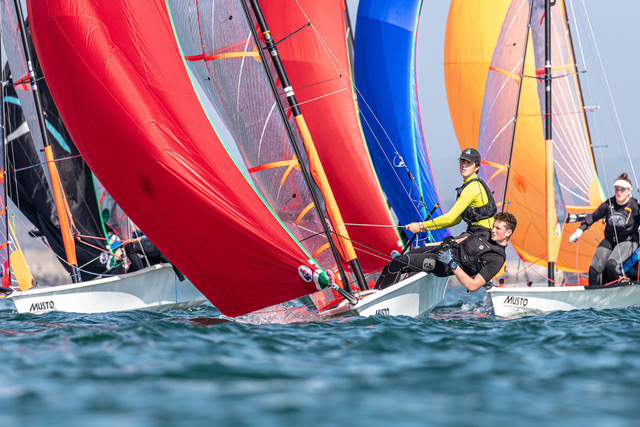 Saturday dawned with light winds, fog, and a dying forecast. 46 boats arrived as the fog cleared and headed out into Portland harbour for an expected 4 races.

Fast out of the blocks off the pin end were Annabelle Vines and Raulf Berry (3079) who lead at every mark to complete the win. Close behind were Ollie Peters and Ben Bradley (3080) in 2nd and Freddy Westwell and Freddy Lonsdale (2903). Race 2 was quickly underway with even trickier conditions and wind dying on the right hand side of the beat. Up the first beat left paid with more pressure at the top of the course. Annabelle and Raulf (3079) led round again getting their second bullet of the day. Races 3 and 4 were sailed in dying breeze (5-7 knots) with race winners James Crossley in race 3 and Noah Fitzgerald (2206) and Leo Wilkinson and Sam Jones (2966) crossing the shortened course finish line at the windward mark in race 4.

Once ashore the first day of GP1 was completed with the first 29er GP social in 18months, with a great Lasagne supper and a brilliant speaker Q&A by Saskia Tidey, Olympic 49er legend.

Sunday had a more promising forecast which delivered with winds up to 15knots by the end of the day. Racing was set off quickly and efficiently by PRO Ian Bullock. The winner of race 5 with a good lead was Finn Morris and Oscar Morgan-Harris (2849). Pressure building at the top of the course meant it paid to use the edges of the course and the top 5 boats where always early onto the lay lines. Race 6 was similar conditions, Ella Lightbody and Felicity Brellisford (2493) leading around the first windward mark but eventually on the last downwind leg overtaken by race and regatta winners Ben Mueller and Sam Webb (12). The last 2 races, the pressure increased, both physically and mentally. The wind filled in and at last there was some more consistent trapezing for the crews. Santi Sesto-Cosby and George May (2816) took the win in race 7, and Kate Robertson and Robin Stein (376) closed out the regatta with a bullet.

Overall, it was a great regatta with 7 different race winners and plenty of sunshine!

Thank you Saskia Tidey for presenting the prizes and Allen Sailing for sponsoring the event and Digital Sailing for the on the water Photos.