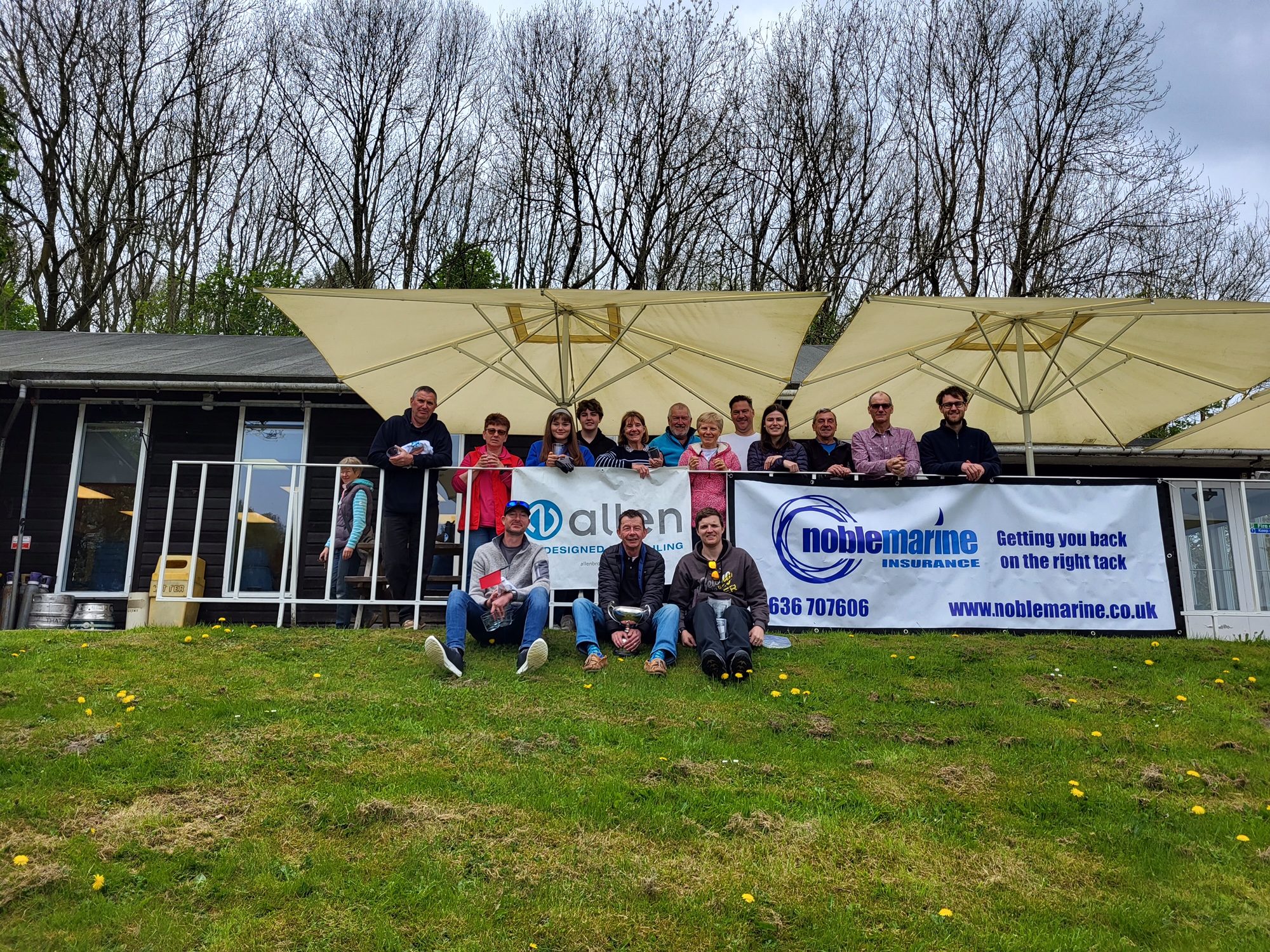 After many attempts, Ogston Sailing Club finally got to host the twice-postponed Allen Enterprise Inland Championships over the May Bank Holiday weekend.  Ogston has always been part of the Enterprise sailing world and has hosted many other events over the years, so it was great to see the blue sails being hoisted.  Also really pleasing to see 9 home boats, some of which hadn’t seen much action over the last few years due to the pandemic.

There were some worrying wind forecasts in the week leading up to the event, however, as the 20 boats lined up for the first race of the day everyone was pleased to feel a reasonable force 3/4 across most of the course.  Martin Bradley was the race officer for the event, an experienced Enterprise sailor himself, and he was able to set a first course which took in a large area of the reservoir.

Anyone who has sailed at Ogston will know that its valley location and reservoir shape can make for some interesting wind shifts at times.  Although the wind was being a little kinder to our visitors than it often is, it was local Martin Honnor with his crew Isobel Hedley-Fenn who were leading at the first mark, a position they would hold for the entire race.  Jonathan Woodward and Matt Smith from South Staffs SC followed them across the line, with Nigel and Andy Bird of the RYA coming in third.

Race 2 followed a very similar pattern with the same three taking the top spots in an identical order.

At this point, lunch was needed, and an opportunity for the fleet to gather its thoughts and decide what they could do about the top three.

Fed and watered all returned to the water for the third race.  It had been noticeable in the first 2 races of how clean the starts had been.  Well not in race 3, a little too much sugar in the cakes from the galley had quite a few of the sailors buzzing and they couldn’t contain themselves long enough to stay behind the line. It didn’t get any better on the restart as two boats ended up disqualified.  The other big change was a different boat at the front with the combination of Ges Brown and Julie Moore taking the bullet, pushing Martin and Isobel into second, with Nigel and Andy taking another third.

Still a bit high in race 4, it took another restart and a further disqualification before they got away.  Martin and Isobel got over their little slip up of the previous race and took their third bullet of the day, with Alan Jackson and Alan Skeens from Burghfield SC second.  The most consistent team of Nigel and Andy took yet another third position. Ges and Julie were again fighting for another first but after the excitement of the previous race Ges started to overheat and decided to test the local water temperature (very chilly), the only capsize of the weekend.

With the boats in and tucked up for the night it was time for the evening BBQ. The evening music was provided by Steve Blackburn. Everyone went to bed (some much later than others) with full bellies ready for another day and a chance to move up the standings.

Sunday morning brought lower winds around force 2/3, and more of a challenge for Martin Bradley to set the courses. Race 5 got away with no issues now that the sugar levels had decreased.   There was a familiar boat across the line first as Martin and Isobel picked up their fourth bullet of the event, followed by Jonathan and Matt, with Steve Blackburn and Tim Brownell of West Lancs Yacht Club finally ending Nigel and Andy’s run of third places.

Race 6 saw a decreasing wind as they got underway.  As the race progressed it lulled yet further leaving a mark near the bank in a terrible wind shadow.  The fleet bunched up as everyone sailed towards the mark and then stopped, anyone watching would have assumed they were at anchor.  The lead boat had to sit in neutral for 5 minutes as it waited for some movement.  Slowly the fleet started moving again, and we ended up with a different boat at the front as Steve and Tim took their first bullet of the weekend.  Nigel and Andy followed them, with Richard and Amelia Pryke of Ripon SC getting the third spot.

After lunch there was still 2 more races scheduled, but with an easing wind the course was reset to try and keep in the areas with the better wind.

The low wind appeared to be suiting Steve and Tim who took another bullet from Martin and Isobel with Ann and Alan in third.

Race 8 was another good one for Steve and Tim as they took three bullets in a row.  Ges and Julie popped back up the fleet to claim second, with Nigel and Andy back in their normal third place.

The evening brought everyone together in the clubhouse for a delicious three course meal, with lots of talk of the day’s action and what Monday might bring. A great big thank you to Andrea and her team for the wonderful food.

Unfortunately, Monday brought exactly what we feared it might, barely any wind at all.  As a result, the last 2 races were abandoned, and the result was called.  Martin and Isobel deservedly took the victory, with a very consistent performance across the weekend.   Steve and Tim’s performance on day 2 saw them climb up to take second place.  Nigel and Andy seeing themselves in third place, after being an almost constant feature of the top 3 throughout the weekend.

There was great sailing throughout the fleet all weekend, and a really good atmosphere amongst the competitors.  It’s worth noting there were three sub 20000 boats, with two of those being classics from 1957 and ’58, and it’s always great to see the old boats on the water.  We had our one all youth entry of 14 year olds Matilda and Freya, with their boat which had only returned to the water 3 days before the event after a rushed refurb after 10 years off the water.  Matilda had only helmed an Ent once before the event, Freya had never been in one, and they’d never before sailed competitively together. Hopefully, we’ll be seeing them in more events to come.

To sum up a wonderful weekend at a fantastic club hiding in the Derbyshire hills.

A big thank you to our sponsors Allen for prizes and Noble Marine Insurance who provided free entry to our youth sailors. Many thanks, Ogston.