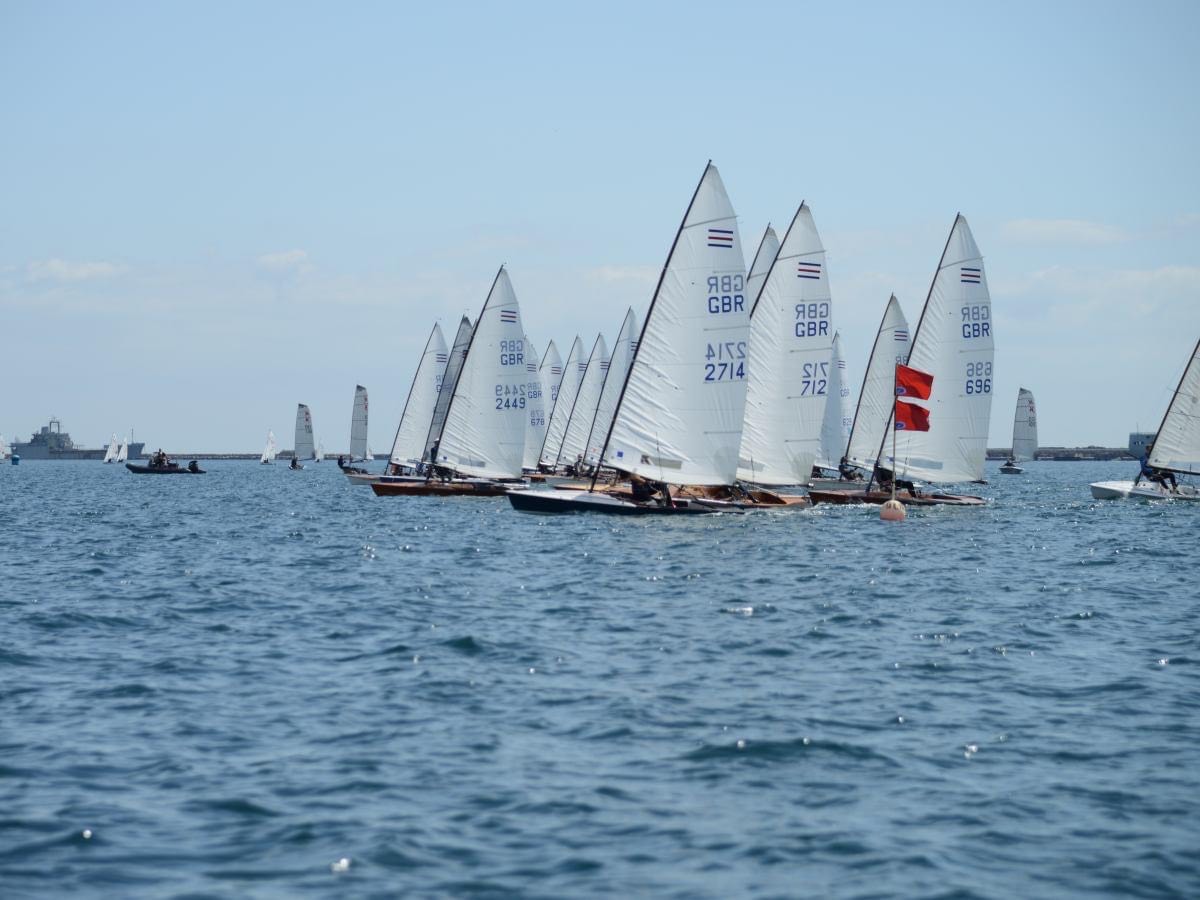 Over the weekend of the 7th and 8th May, thirty Contenders descended on Castle Cove SC for the fourth leg of the Allen Travellers Series. The weekend was shared with a good turnout of International Canoes and Hadrons.

With the wind in the Northwest and a sunny day, the sea breeze was likely to set in from the opposite direction. It did, and so the first race was abandoned just before the end of the first lap as the wind went completely flat and then did a 180 degree fill in. Some were pleased, others weren’t.

Just to add a feeling of jeopardy to the show the first race restart had two or three recalls before the black flag restored order. It was to be nailed up for the rest of the weekend!

The wind by now was enough for just trapezing but it was last year’s winner Nick Noble, a strong wind expert, that led the fleet to the finish, followed home by brothers Rob and Adrian Smith and the now puny weight Chris Boshier.

The second race, with gusts and holes, juggled the fleet somewhat but Adrian was able to pull clear into first at the finish with the often-inconsistent Ed Presley, the consistent Graeme Willcox and Stuart Jones following on.

In the last race of the day, sailed in similar conditions, Graeme picked his way through the fleet to take the win. Adrian picked up a nice second to put himself in the driving seat overnight. Nick Noble popped in for a third with Iain Horlock following home.

Saturday night was well catered for by the club and the beer and hard luck stories were flowing.

On Sunday the wind was nicely up from the Southeast so there was a bit more solid trapezing than previously, although holes could still be found. With the downwind pumping flag raised an exhausting day’s racing was going to help those with a modicum of fitness.

As always the start and first beat were crucial and with the fleet spreading out across the course it was those with the vision to notice that the wind was shifting continuously to the right that led the way to the finish. Ed took that one by some distance with Graeme adding a second to put the pressure on. A third for James Spikesley and a fourth for Carl Tagoe did something to atone for their previous day’s results. Adrian’s sixth meant that the leaders were now on the same points.

After a quick course reset as the wind had gone right by ninety degrees we were treated to a Tom Hooton, nerves of steel, port tack flyer. You can’t help cheering it when it happens. The question now was would the wind continue to the right. The fleet split with those setting off to the right against those that thought it had gone far enough with more breeze to the left. Gary Langdown proved that the left was just the better option. He sailed to the finish with none of his breakages or capsizes to win it. The now consistent Ed was second with Tom converting his port start into a third. With Adrian fourth and Graeme sixth it was now advantage Adrian going into the last.

Special mention should be made of relative newcomer, Duncan Ward, who led for a large portion of the race. Finishing well up before seeing the black flag infringement.

With the scene now set for a final showdown, the fleet was off first time, in the by now variable wind strength and direction. Ed once again picked his way to the front and led by a comfortable distance from Stuart, at last finding some form. He was, however, almost charged down by a fast-finishing, better pumping, Graeme who took an all-important third. Tom in fourth held off Adrian to keep things tight, neither leader knowing if they had won overall.

As it turned out it couldn’t have been closer. They were on the same points with countback going down to the number of third places. Graeme having a two to one advantage in those took the meeting with Adrian second, winner of the second day Ed in third and Stuart picking up the report writing fourth.

Thanks should go to all at Castle Cove who made it a great weekend of sailing and socials.