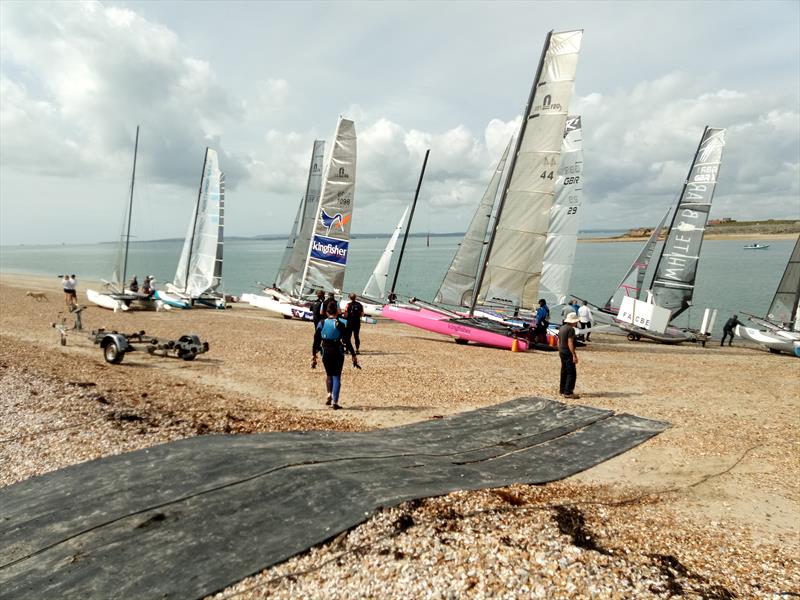 The eighth edition of the Solent Forts Race took place on the 9th June. This annual long-distance event takes place in the eastern Solent and is run by Hayling Ferry Sailing Club from their base at Langstone Harbour entrance.

The event is part of the Allen Endurance Series, with GPS tracking provided by SailRacer. The race comprises several legs with competing boats rounding marks such as the Napoleonic channel forts, returning to a turning mark at the Club to complete each leg.

The weather forecast for Saturday proved correct and the Club was forced to cancel the practice race due to high winds. However, the rain stayed away and the focus soon changed from sailing to the evening entertainment with the Club’s Band-on-the-Beach Summer Party.

Come Sunday morning the wind had gone to the opposite extreme and at one point a delay to the start seemed likely but the race started on time at 10:30 with a short leg to the Winner cardinal. The first boat back to the turning mark was the Nacra Carbon 20 of Douglas Wright and Christian Richardson with the F18 of Tim Neal and Robbie Jon Garker ahead on corrected time. This leg also saw the first retirement with the Dart 18 of Ken Wallis and Charlie Lingwood pulling out with rudder trouble.

The next leg took the fleet to Spitsand Fort in a building breeze which enabled the Vampire of Will Sunnocks and Mark Self to foil and this boat had the lowest corrected time on this leg. However, the overall race leader at the end of the leg was now the F18 of Simon Northrop and Caleb Cooper.

Leg three was the longest in this edition of the race taking the boats to Bembridge Ledge cardinal off the western corner of the Isle of Wight. A distance of 6 nautical miles each way, this leg typically took around 1 half hours due in part to the wind going light.

Leg four to No Mans Land Fort saw the breeze building nicely after the earlier lull and by the end of the leg the Vampire was first around the turning mark. On corrected time the order at the front of the fleet was the same and would remain so for the rest of the race. This leg also saw the retirement of the Dart 18 of Mark Robson and Kerra Pearce who despite a valiant effort had little option but to retire with the time limit for the race fast approaching.

The final leg took the fleet along the Hayling seafront to West Pole (off Chichester Harbour entrance), with one boat going aground briefly on the West Winner but re-joining the race to finish.

Ten boats completed the race, with line honours going to the Vampire. The final positions on corrected time were as follows: