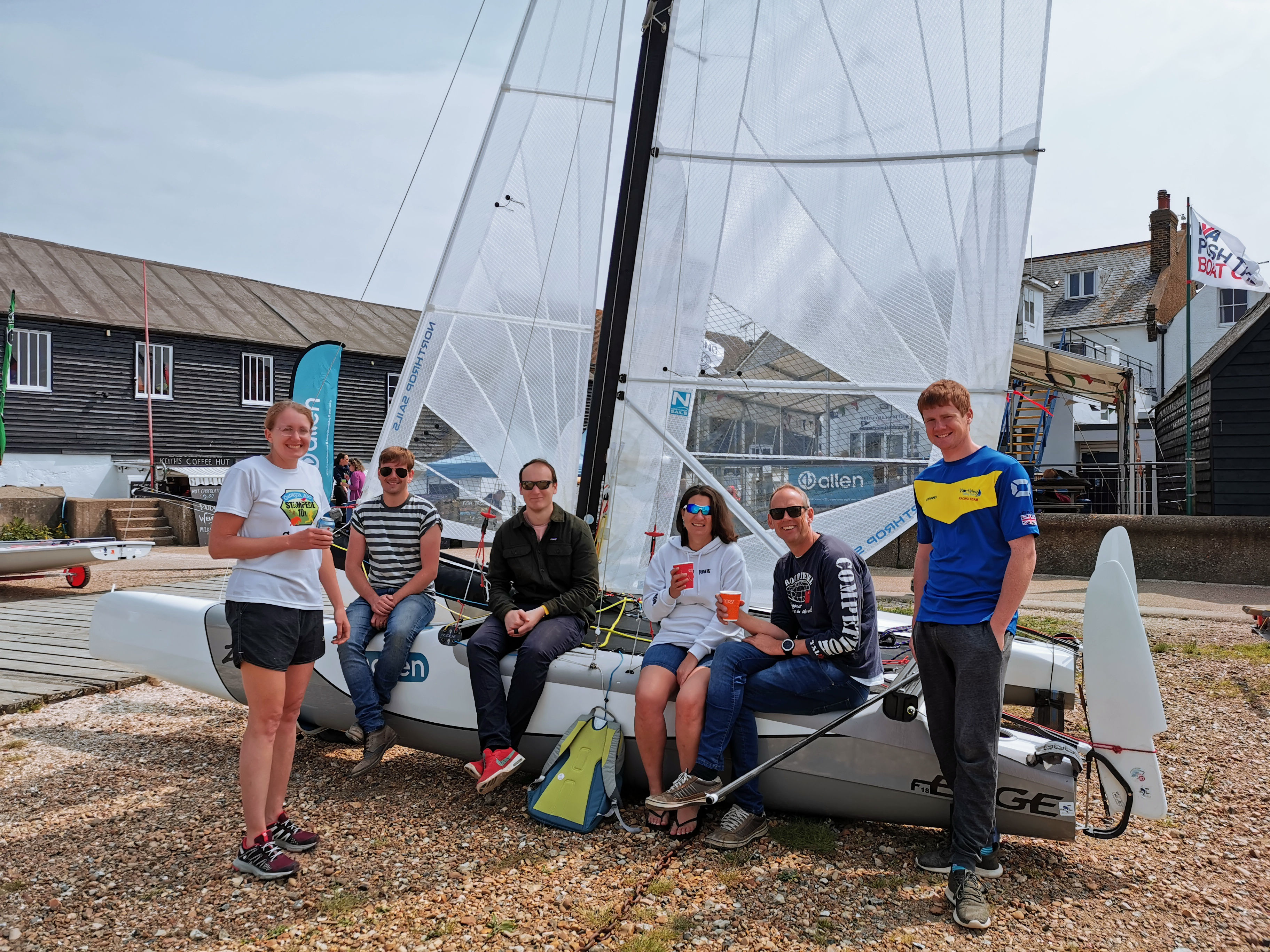 The weather for the weekend of the 18th/19th of May was forecast to be very light but that didn’t stop 28 fast catamaran and monohull dinghies from entering the first round of the Allen Endurance Series at Whitstable Yacht Club.

Whitstable Yacht Club, which is located on the South side of the Thames Estuary in a lovely fishing town with a fantastic sailing area, each year hosts the Whitstable Forts Race. A race out to the Maunsell Forts and back. The race also includes other points of interest around the coastline such as Herne Bay Pier.

Most of the competitors arrived Friday afternoon or early Saturday morning to rig and ready their race machines. Racing on Saturday was not scheduled to start until the relaxed time of 2PM giving everyone plenty of time to tinker and fill up on bacon rolls. The wind slowly filled in thanks to a sea breeze and racing soon got underway on a large windward leeward course set not too far from the shore.

Thanks to the sea breeze there was plenty of wind for some of the foiling boats to get up and go. With club racing also taking place alongside the forts shake down race there was plenty of action to watch out on the water! When Saturday’s racing was done, with some competitors glad for the shakedown race due to breakages, it was into the bar to await the result whilst making the most of the free pints and a BBQ put on by the club. Kyle Stoneham and Josy O’Brian (Vampire) took a convincing win with a corrected 25-minute lead to second place Grant Piggot and Simon Farren (F18).

Sunday morning looked a lot like most of the sailors who had been out in Whitstable the night before, gloomy and grey. After a short briefing explaining the days format and rules for taking part, paying special attention to tallying on and off (we wont name names), it was soon time to launch and head out to the start area with a steady 6 or 7knot North Easterly wind. The Fleet got away first time and headed North off the start out into the flooding tide. William Sunnucks/ Mark Self got to the forts first in their foiling Vampire followed by Kyle Stoneham/ Josy O’Brian in the other foiling Vampire. Not far behind was Nick Elmore/ Andrew Wood in their F20. First F18 (the largest fleet with 10 boats) to round the forts was Simon Northrup/ Caleb Cooper.

After rounding the forts, it was then a long downwind leg back to the start gate where Kyle/Josy managed to take the lead. After crossing through the start gate, the sailors could then head east to Herne Bay Pier. As a separate part of the race, the leg from the start gate to Herne Bay Pier and back classifies as the “Endurance Race” which includes the slower monohulls and single man catamarans. By the time the slower fleets had got half way along the leg back to the start gate the front markers in the fast cats soon went roaring past. By this point the wind was also starting to ease off. After a few more legs, out to some of the channel markers in the estuary, the race committee then decided to call it a day as the wind was looking like disappearing.

After a quick pack down, the race organisers held a prompt prize giving allowing those from further a-field to set off as soon as possible.

The full race is watchable online thanks to tracking supplied by SailRacer. Watch the race here.

The Allen Endurance Series combines 4 already well-established endurance events. The Whitstable Forts Race, Solent Forts Race, East Coast Piers Race and Isle Of Sheppey Round The Island Race. The winner of each event will claim a £100 Allen voucher whilst the top 3 boats in the overall standings after all 4 events will take home an additional £100, £200 and £500 Allen voucher respectively. The next event in the series is the Solent Forts Race taking place on the 8th & 9th June. Head over to allen.sailracer.org to enter online.

Forts Race – leg from start line to Maunsell Forts and back. Fast Cats only.

Endurance Race – Herne Bay Pier and back. All fleets.