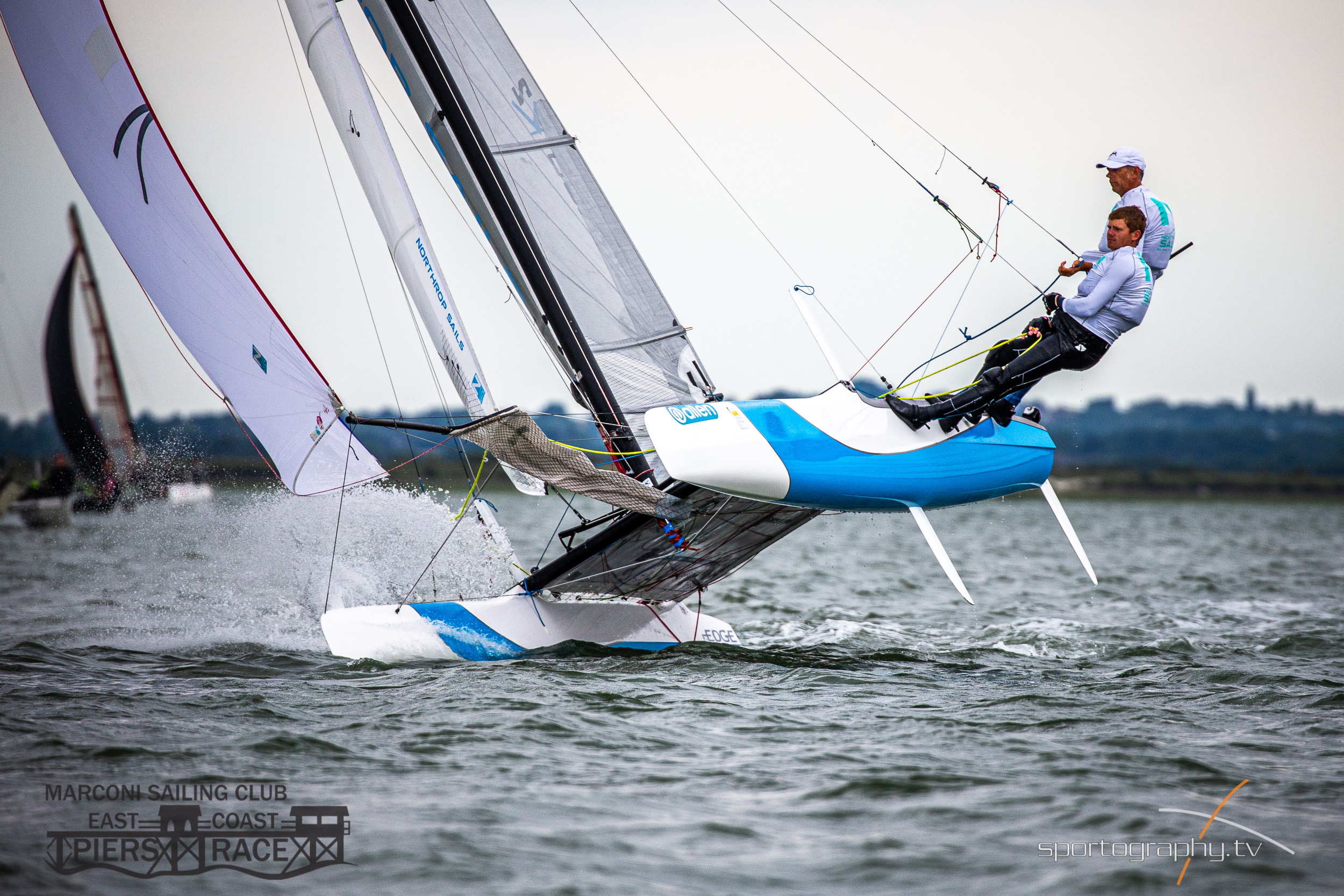 The Allen Endurance Series (AES) will be returning for its 3rd season this time with the inclusion of an additional event and even bigger prize fund.

Launched in 2018 the series combines the UK’s premier long-distance events to give high-performance Catamaran and Skiff sailors a season-long series to compete for. Currently included are the Whitstable Forts, Solent Forts, East Coast Piers and Round Sheppey races. But for 2020 Allen has announced the inclusion of the Anglesey Offshore Dinghy Race. The series will remain with one discard.

As well as adding a 5th event to the series Allen has also announced an increase in prizes. Over £1000 worth of vouchers and other merch will be available throughout the 5 events, as well as, the overall series prizes of £500, £250 & £100 vouchers for 1st, 2nd and 3rd respectively. Competitors will also be in with the chance of winning a complete Catamaran mainsheet system worth £600 just by entering an AES Event. For each entry into an AES race, a competitor will receive an entry into the random draw.

The 2020 Allen Endurance Series will officially be launched at the RYA Dinghy Show on Saturday the 29th at 1630hrs on the Allen stand, B34. The launch will also include the prize giving for the 2019 series. Come along to find out more about the series.

The Whitstable Forts Race –  CANCELLED (2019 write up and results here)

Due to the Covid-19 pandemic, the Whitstable Forts Race has, unfortunately, had to be cancelled with no suitable dates later in the year.

A long-distance race which has evolved over its 24-year history into a well-balanced test of sailing and racing skills, attracting top national helms as well as experienced club racers and international entries. For 2020 the Saturday afternoon will feature a shakedown race to the Forts and back – a single leg for boats with 1000 PY and below. For those boats of 1000+, there’ll be an inshore race. On Sunday, laid out in hub and spoke format with each leg returning through a gate near the club, will be the Endurance Race. The full course covers 85 kilometers in estuary, coastal and open sea conditions, and provides racing at all points of sailing. The flexibility of this format differentiates the Forts Race from other marathon events.

The Solent Forts Race is a long-distance event for sports Catamarans and fast monohull dinghies and is set in the Eastern Solent, with Hayling Island and Portsmouth to the north and the Isle of Wight to the west. The race comprises several legs radiating out from a gate (like a star), allowing the course configuration and length to be adjusted according to the conditions prevailing on the day. The race gets its name from the Napoleonic Channel Forts that comprise two of the marks of the course. The race has a unique ‘time out’ feature that allows boats to take an optional 30-minute break during the race. This time may be used for a comfort break or for tactical purposes. Saturday also features a shakedown race.

CANCELLED from the organisers – “We’ve made the unfortunate decision of cancelling the 2020 East Coast Piers Race.

Our primary reason for doing this is because of safety. We line the course with mother boats (club yachts) at each mile of the course to provide essential safety and a watch over competitors. With the current lock down no activity to put moorings in, or to get yachts ready has been possible so far. We are always against the clock with last minute launches to support the event but with this year many yacht owners are not planning to launch their boats.

Secondly, we want to put on an event to be proud of – this year, we feel that our plans will have to be chopped and changed based on Government advice which would mean we can’t run a safe or good event. We also don’t know if large gatherings of people will also be possible.

The Anglesey Offshore Dinghy & Catamaran Race is The North West’s premier offshore dinghy race, covering over 15 nautical miles around the South East coast of Anglesey. Frequent visitors include Olympic sailors, and past and present National Champions. The race starts on the Royal Anglesey start line at Beaumaris in the picturesque Menai Straits. Then through Puffin Sound and passing the rugged cliffs of Anglesey. After crossing the glorious sandy beaches of Red Wharf Bay, the fleet head for the famous Lifeboat station at Moelfre. The finish is at Red Wharf Bay Sailing Club at Traeth Bychan. Rated by Yachts and Yachting as one of the top events to compete in. For 2020 the event will also include a shakedown race from the Royal Anglesey Yacht Club on the Saturday night followed by a social evening before the Endurance Race on Sunday.

IOS Round the Island Race is a long-established, long-distance event designed to test sailing skills and endurance over a 40-mile course. Sailed clockwise around the island of Sheppey, starting and finishing at IOS Sailing Club. The race includes tidal sea, river & estuary sailing. The event is the longest dinghy and board race in Europe —The race is open to all classes of dinghy, catamaran and sailboard and there is a shakedown race on the Saturday.