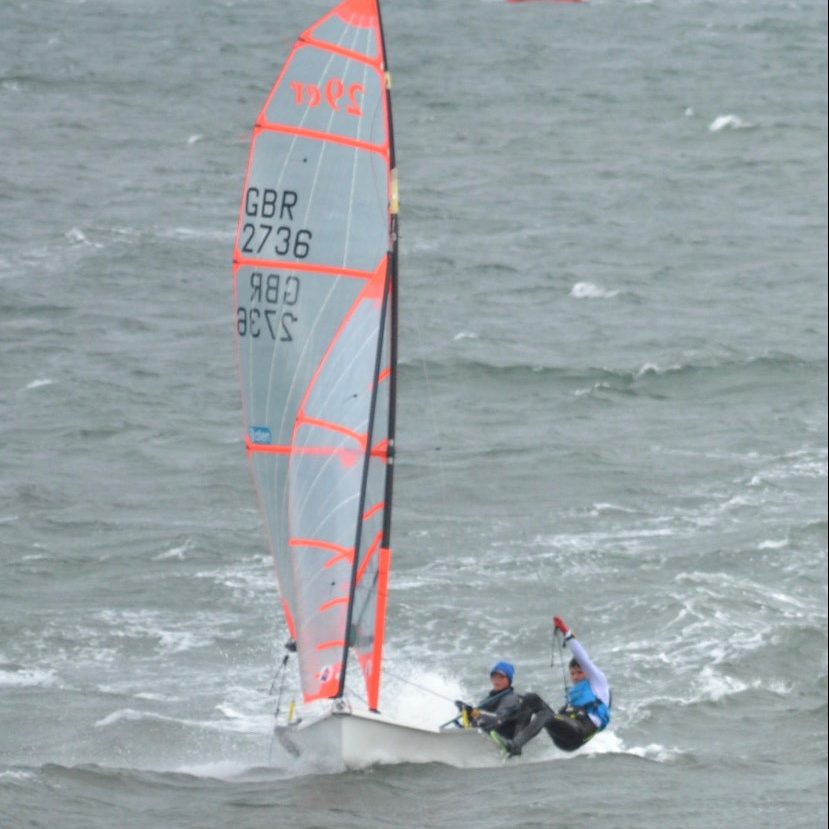 It has been a busy weekend at THYC this weekend, with the club hosting The Allen Sailing Grand Prix 2 event for the 29er UK Class Association. Competitors started arriving at the club on Friday evening with the first boat arriving at around 19:30 followed by a steady stream of boats arriving up until 23:30, with tents being pitched on the lawn and camper vans parking up in the club car park. Further boats arrived early Saturday morning to make the fleet of approximately 35 boats. Competitors had travelled from as far away as the South Coast, South Wales, Norwich and Scotland. Following rigging, registration and various briefings, the Race Management team and Safety team supported by the beach and launching volunteers tried to get the 29ers out racing on Saturday, but with too much wind it just wasn’t to be. The boats that managed to launch had an adrenaline fuelled blast around in strengthening winds and deteriorating sea conditions and all came back with big smiles on their faces. The order of the day was then dictated by the following signals AP over H and then unfortunately N over A later in the afternoon.

This gave the opportunity for competitors to catch up with their friends, explore the marina and a large group even went to see the new James Bond movie. The club hosted a social on the Saturday evening which consisted of some acoustic background music provided by one of our members Andy Davison and food was served from the galley. Andy and Dave Andrews also let the club / class use some of their equipment for what can only be described as one of the most energetic and enthusiastic karaoke nights ever. The way the senior sailors made sure every single member of the fleet was up and joining in on the dance floor in one big circle, was fantastic to see. What a really sociable close class this is. Once the sailors had had their fun, it was time for the parents to sing with encouragement from the senior sailors. Not to be out done by this the THYC Volunteers and Bar Staff decided to get up and do a number.

Sunday saw similar conditions to those of Saturday, but with the wind blowing from the South West the bay was a little more calmer than the sea conditions of the previous day. Various forecasts were consulted and similar discussions were had during the Race Management and Safety Team Briefing. AP was raised ashore while waiting for the tide and the Committee Boat and one Safety Boat locked out of the marina and headed to the sailing area to take some wind speed readings. The PRO and Safety Officer made the difficult call that the AP flag ashore would be replaced with N over A.

It has been an absolute pleasure hosting and facilitating this event for the 29er UK Class Association and we hope they will return to the club again.

A lot of effort and hard work goes into organising such events and without club volunteers, such events cannot happen. A massive thank you goes to all volunteers that have given up their time to support and make this event happen. Many many thanks to Christine Hughes, Clare Hope, Dave Andrews, David and Angela Craig, Ian Lynch, John Cook, Jonah Jones, Julia Chard, Malcolm Boagey, Mark Woolley, Nick Richardson and Paul Bryant. Apologies if we have missed anyone.

Many thanks also go to Allen for sponsoring the event and Pam Flynn and her team in the Galley for keeping all the sailors and volunteers well-fed over the weekend and Micky Early for providing support as liaison between the class and club during the event.