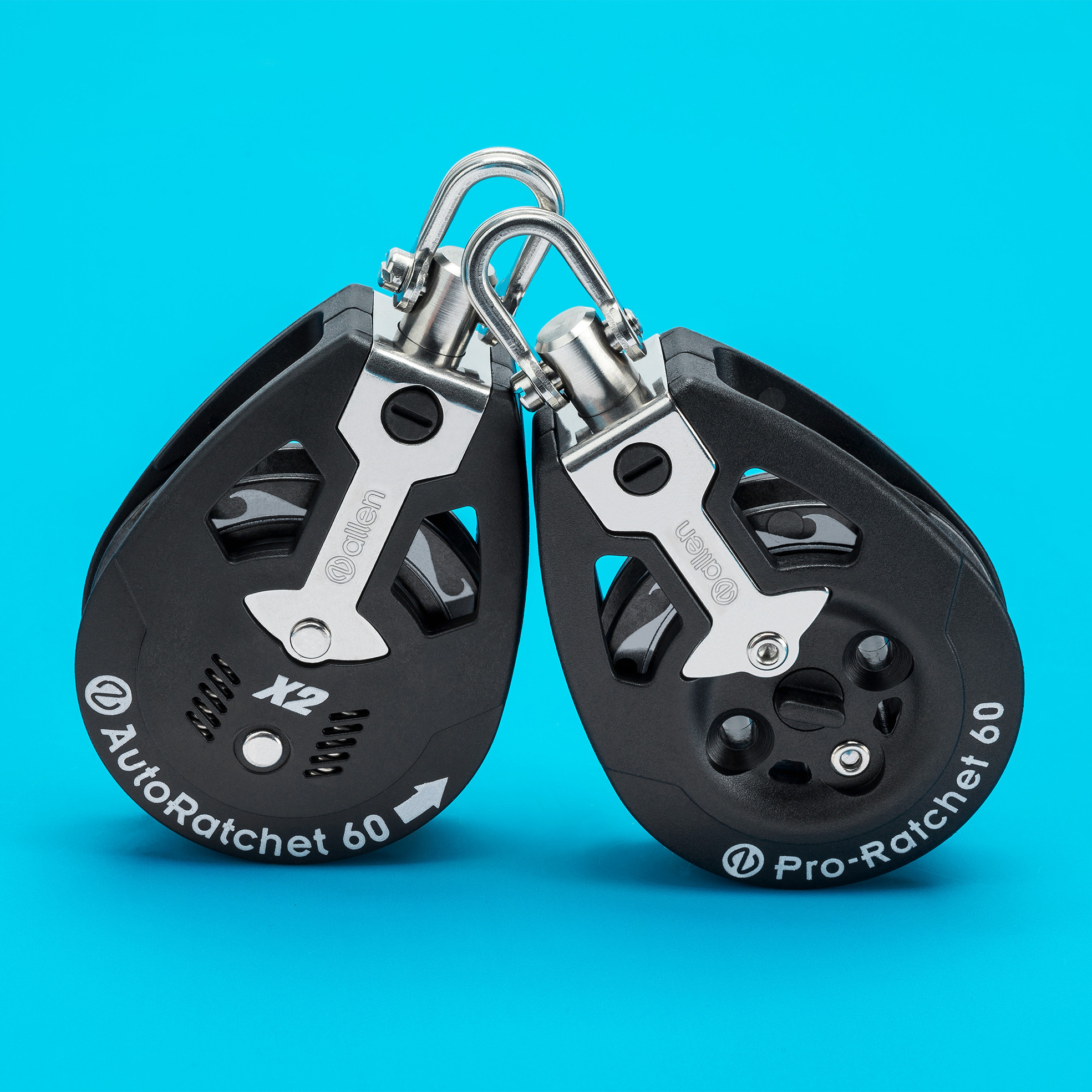 The ratchet block is arguably one of the most important pieces of hardware used on a sailboat, so choosing the correct size and type can make a big difference to how you sail your boat and what feedback the sails give you. In this article you will find out all about how the ratchet block works, the difference between a switchable and AutoRatchet as well as the different sheave options.

What is a ratchet block?

How does a ratchet block work?

Why use a ratchet block?

What is a ratchet block?

The ratchet block has one purpose; to add friction to a control line system to make it easier to hold and adjust. This is achieved with two features. Firstly, a sheave that can only spin in one direction. Secondly, by having a sheave which is shaped to grip the rope.

How does a ratchet block work?

The internal mechanism is where all the magic happens. To create a sheave that can turn in only one direction requires a toothed design paired with a spring-loaded pawl. As the sheave turns the pawl jumps over the teeth (this is where the clicking sound comes from). As soon as the load changes direction the pawl locks into the teeth which stops the sheave from turning. Once the sheave is locked into place the outer profile comes into effect. Ratchet block sheaves are designed with a V shape, this is to create a gripping or jamming effect on the rope. This gripping effect combined with a sheave that only turns in one direction adds friction, which makes it easier for the user to hold the line when under load.

Why use a ratchet block?

Friction is usually something we try to eliminate from most systems on a boat. The less friction there is the quicker, smoother and easier a line will run. Resulting in quicker and easier trimming of a sail or control line. However, some control lines such as mainsheets, jib sheets and spinnaker sheets require a person to hold and adjust them for long periods of time. The loads on these lines can be heavy and if all the friction was removed it would make them extremely hard to hold and adjust by hand for those extended periods of time.

So, by adding a ratchet block at the end of one of these systems helps create enough friction and reduces the load felt by the sailor when holding and easing the line. But ratchet blocks do not reduce the actual load when pulling the sheet in. This is because the ratchet block will now spin freely to ensure the system is as frictionless as possible.

It’s important to make sure the ratchet block is always reeved in the correct direction, so you don’t end up pulling against the ratchet and making your life harder! The AutoRatchet has an arrow showing which way you should pass the rope through. The Pro-Ratchet range requires you to spin the sheave by hand to find the correct direction.  Remember – The block should only turn and click when you are pulling the rope in! You want don’t want the sheave spinning when letting the rope out.

Having said above “adding a ratchet block reduces the load felt by the sailor when holding and easing the line” well, sometimes you may not want the ratchet block to be turned on as its adding too much friction. Usually when it’s light winds and the loads of the lines are not as heavy. But you don’t want to have to change the blocks in a system every time you go sailing depending on the wind strength, so this is where the switchable and AutoRatchet choices come in.

Turning the ratchet mechanism off will allow the ratchet block to spin freely in both directions, so it will act as a normal ball bearing block and help reduce overall friction in a system. As this is done manually it gives the user lots of control, great for mainsheet or spinnaker sheets where you may want to introduce more “feel” into the sheet when the wind drops off.

However, you may not always be able to turn the ratchet on and off as you please. Probably due to being busy trying to steer the boat or untangle that line from your foot before a gybe! This is where the AutoRatchet comes in.

The AutoRatchet does exactly as you would imagine; it turns on and off automatically. There is no switch and as such the user cannot control when the block turns on or off. But don’t worry, the Allen design team have spent years perfecting the load at which the AutoRatchet engages by utilising feedback from some of the World’s best sailors.

One of the best examples for the use of an AutoRatchet is on a spinnaker sheet. When you initiate a gybe the load on the sheet will start to reduce as you ease the kite, the AutoRatchet will turn off and allow the sheet to start running more freely. In turn this makes pulling the kite across to the other side of the boat much easier.

In summary, switchable ratchets and AutoRatchets are very much a personal choice. If you prefer to have more control then perhaps the Pro-Ratchet (switchable) range is for you whereas, if you prefer to let the block do its thing then choose the AutoRatchet.

To allow even more customisation we now offer our 60mm ratchet blocks with two different sheave options, but what’s the difference?

The standard sheave has had years of development by the Allen design team, it’s been designed with an octagon shape which means there is eight V’s distributed evenly to grip the rope. We feel the standard sheave offers a great amount of friction to be used in any system from dinghies to keelboats.

However, if you’re looking for even more grip then we also offer the wave sheave option. The wave sheave was developed on feedback from our elite team allen sailors who wanted different amounts of friction in different wind conditions. When it’s really windy they wanted the ratchet block to have as much friction as possible to make holding the line easier.

So, although our team allen sailors wanted something sharp, we decided to go down a different route. The design team came up with a concept of offsetting the V shape inside the sheave. By offsetting the V shape and creating an asymmetric design the wave sheave now features 16 V jamming points. Twice the amount of the standard sheave.

During initial testing to find out the percentage increase of holding power it was also discovered that the offset design created a nicer feel when easing the sheet. The rope now “snakes” through the V grips rather than “skipping” over the symmetrical flat spots of the standard sheave. The result is a less jumpy feel when easing the sheet as well as an increase of 40% (dependant on rope) holding power without increasing the sharpness of the sheave and protecting the longevity of rope.

Using the correct rope with a ratchet block is more important than you might think. The rope is the part that is in contact with the sheave, so if the sheave can’t grip the rope or the rope isn’t tough enough to handle the sharpness of the sheave then you will quickly be left with an under performing system.

Below we have listed, in no particular order, different rope from a variety of manufacturers which are best paired with our ratchet blocks.

Kingfisher Evolution Dinghy Lite – Features a braided Dyneema and non-slip fibre cover which is both grippy and flexible, it also has 12 strand Dyneema core so can be easily tapered.

Kingfisher Novaswift – Great for lines that are frequently adjusted by hand, it has a 12 strand Dyneema® SK78 braided core with a Swiftcord style cover, making it ideal for tapered dinghy sheets. It is very strong, flexible and easy to splice.

Marlow Excel R8 – Made using a Dyneema®  bio-based Dyneema SK78 core but with an 8 plait cover, blended from Technora®  aramid and polyester. Designed as a high performance sheet performing well in ratchet blocks.

To use any of the information in this article or to find out more please contact marketing@allenbrothers.co.uk