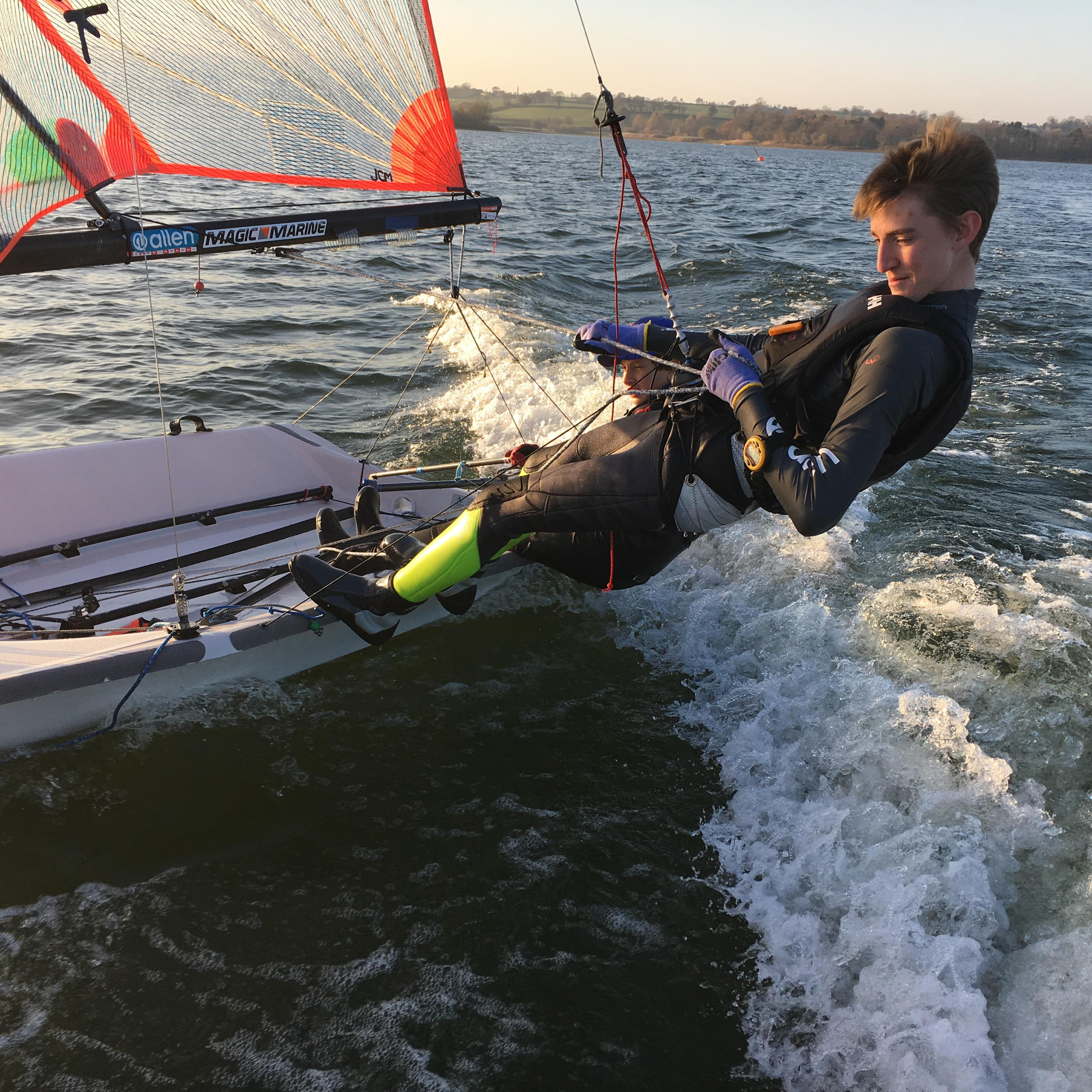 Allen’s First recipient of the Allen Academy Optimist was Quinn Edmonds back in 2016. Since then, Quinn has gone onto sail an RS Feva very successfully with his crew Fin Oliver. The boys are now starting to transition into the 29er, making sure they have a head start once they become too big for the Feva.

When transitioning to a new boat, such as the 29er, there are many new things and skills that a sailor will be required to learn. The most important for the crew, in this case, being the ability to trapeze. So, the first thing any crew will need before learning to trapeze is a harness. Being well informed of the latest Allen products Fin decided he would try the Keyball trapeze system. Here’s what he thought;

“Quinn and I have been transitioning into the 29er, as with starting to sail any new boat we needed some new kit. One of the first things we needed was a trapeze harness. Luckily when we first started, I was able to get my hands on an old traditional hook harness, however, I didn’t find it very comfortable.

I also kept getting the hook caught on things when we capsized, as you do when you first learn to sail a 29er! I found I got stuck on the gunnel quite often. I soon decided that I needed to find a better alternative.

Having sailed with Quinn for some time now, I know all about the Allen range of hardware. I was aware that they offered an alternative, the Keyball system. As soon as I could, I bought one and have been really pleased I did ever since.

Unlike a traditional hook system, it has just a plastic socket molding on the harness. I soon found that it is less likely to cause damage to the boat as it has no sharp edges. Also, I found it much easier to clip and unclip compared to the traditional hook. I have the Banks Sails version of the harness which I find incredibly more comfortable and fitted than the other harnesses I had tried.

When using the Keyball system I feel very secure when on the wire and still have very good movement and flexibility around the boat. This has made me much more confident in the boat and I feel that I can tack and gybe better than I could with the traditional hook.

I have been asked several questions by coaches and other sailors about the Keyball system, such as; how I hold on during the exits of tacks and gybes. Personally, I think that even though it has a thin handle my hand still always lands on it, and the flexible ball on the end is easy to slide into the socket on the harness. So, I don’t think that grip is a problem.

I don’t think that anyone would have any trouble adjusting to using the Keyball if they decided to switch from a traditional hook. Overall, I really like this Keyball system and don’t think I’ll be changing anytime soon.”

Allen launched the Keyball trapeze system at METS 2014 and since then Allen has gone onto work with some of the top harness manufacturers such as Zhik and Banks Sails to provide an alternative to the savvy sailor who is open to trying something new.

The Keyball system is available as both a ready-made harness and as a retrofit-able kit head to the Trapeze Harness section on this website to see more info. To find out more about the system watch the following YouTube videos below. 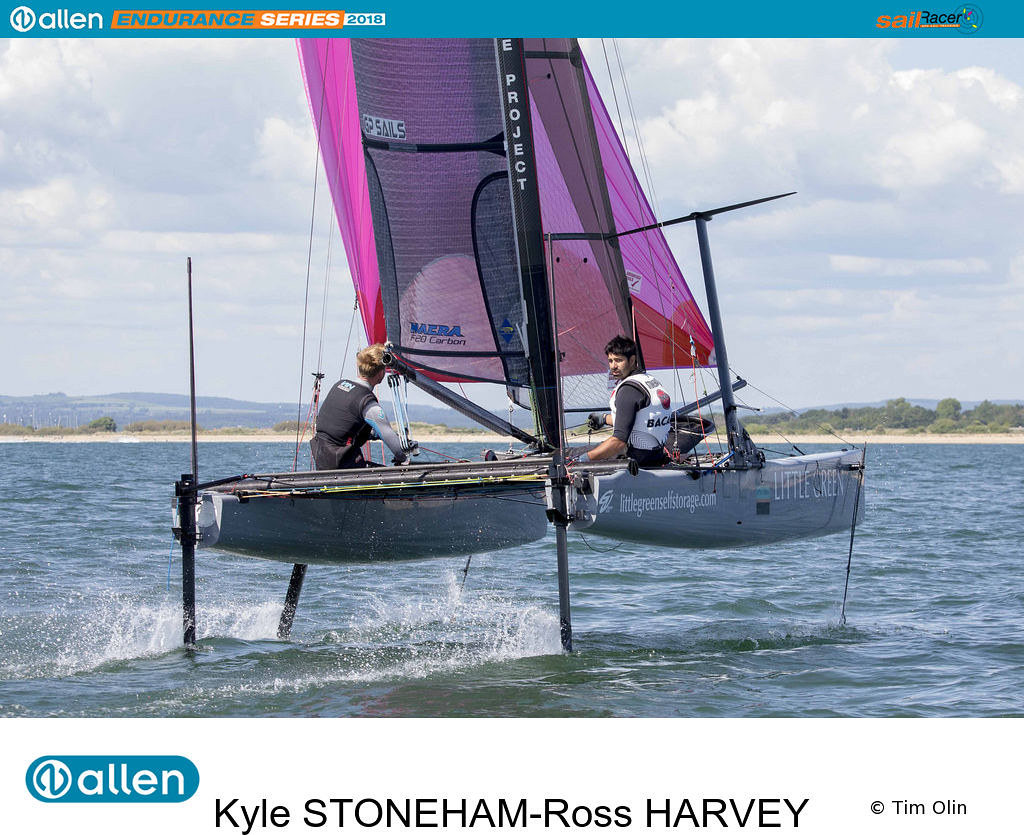 The Whitstable Forts Race is A long-distance race which has evolved over its 24-year history into a well-balanced test of sailing and racing skills, attracting top national helms as well as experienced club racers and international entries. Unlike normal styles of racing, the Whitstable Forts Race is laid out in a hub and spoke format. Competitors must sail to certain marks of the course which are off the coast of Whitstable and then back through a gate outside the yacht club before heading to the next mark. This style of racing allows for the sailors to cover over 85km of estuary and coastal waters as well as racing at all points of sail.

In the past the Dart 18, Formula 18, Hurricane 5.9, Spitfire and Tornado are all classes that have performed well. But its not only fast catamarans that can enter. Any Dinghy with a PY of 1270 or lower may enter the race.

The Allen Endurance Series, which is managed by Sail Racer, combines 4 already well-established endurance events. The Whitstable Forts Race, Solent Forts Race, East Coast Piers Race and Isle Of Sheppey Round The Island Race. The winner of each event will claim a £100 Allen voucher whilst the top 3 boats in the overall standings after all 4 events will take home an additional £100, £200 and £500 Allen voucher respectively.

Also running alongside the Allen Endurance Series (AES) is the Allen blogger award to encourage creative writing about people’s experiences on the water, building awareness about the series with the aim of increasing participation in this form of sailing. The prize is superb: £1500 of Allen kit for the winner’s boat!

The organisers want to see engaging writing, focusing on the human-interest parts, the build-up, the challenges, paddock talk and shoreside fun to encourage more people to enjoy this great sport and these unique events.

To enter the AES blogger award participants need to send an engaging article about their 2018 season or one of the Allen Endurance Series Events to Jeremy Nicholson at Allen along with any supporting photos to illustrate their story.

The winner will be selected to blog on social media throughout the 2019 season, at the end of which they will receive an Allen fit-out for their boat to the maximum value of £1,500. 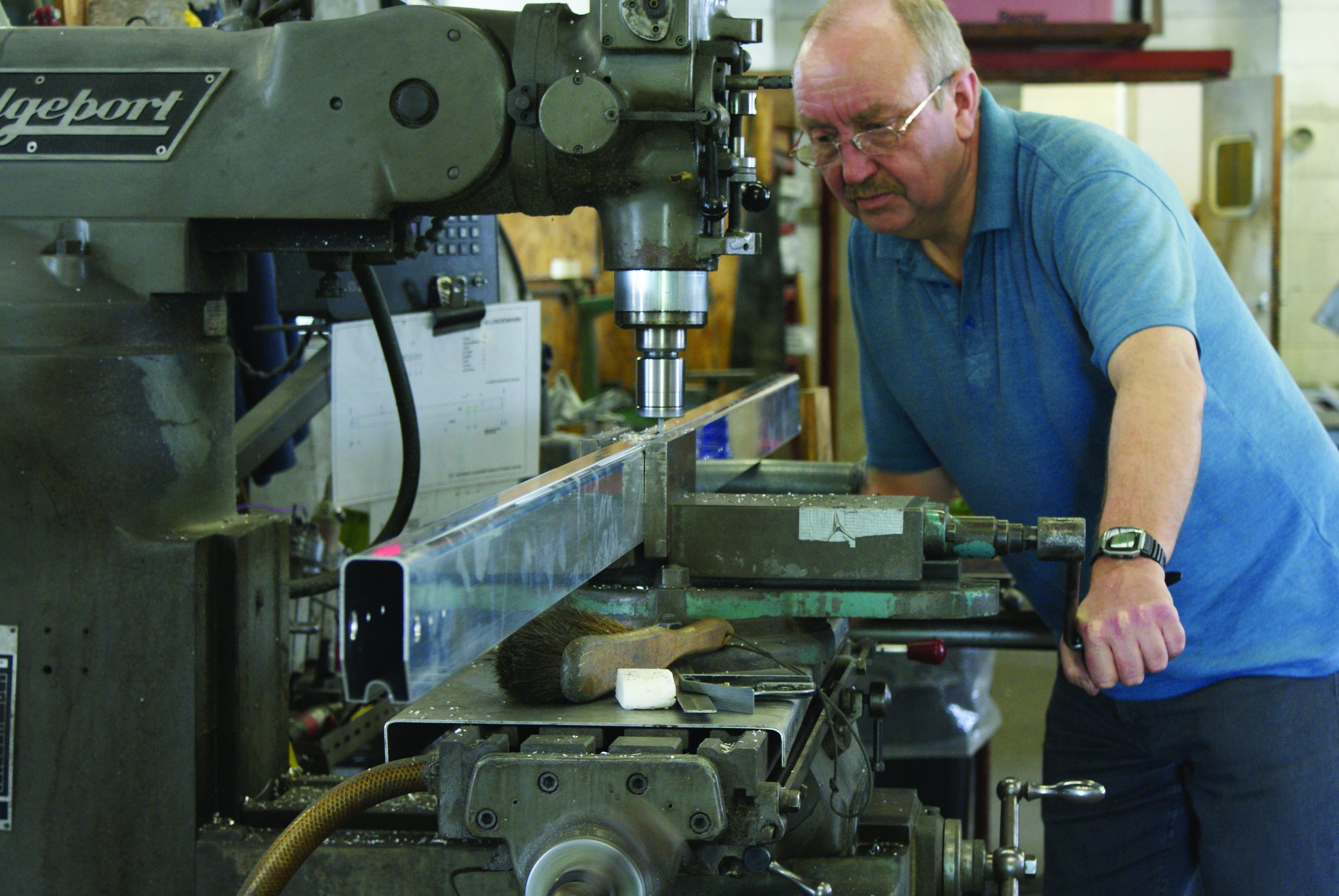 The UK’s leading manufacturer of performance sailing hardware, Allen Brothers, has recently undergone an audit to gain ISO 9001 certification, and as a result, the British company now has accreditation to be formally recognised as competent to perform specific processes.

ISO 9001 is an internationally recognised standard set by the United Kingdom Accreditation Service (UKAS). Businesses that gain ISO 9001 have shown to UKAS they are able to keep a high quality of business practice throughout many different areas, including; customer service, consistent product manufacturing and regulatory requirements. Allen Brothers will have to undergo an audit each year to show UKAS it can maintain a satisfactory level or production and business practices.

In recent years Allen Brothers has seen major growth in custom projects for businesses both in and outside of the marine sector. Undergoing many different custom projects is only achievable with a well informed and organised production operation. Having gained ISO 9001 accreditation shows Allen Brothers is capable of mass manufacturing high-quality products as well as being able to ensure a high level of craftsmanship is carried out for custom items.

The Allen brothers Tony and Glen first founded the business back in 1956 with a vision of creating performance sailing hardware driven by innovation and technology. The first products they produced for their own race boats were such an improvement on everything then in use, customers demanded they set up production to meet the market. 63 years later and the family run business still holds true to the same principles by staying at the forefront of innovation and technology for the marine industry.

Allen Brothers still researches, designs, prototypes and manufactures everything from its Essex based factory. The company has recently invested in new computer-aided design software, production software and machinery such as a new vertical machining centre to help maintain a high standard of production.

Some of Allen Brothers in-house resources include:

Component parts – The factory is equipped to manufacture a diverse range of parts and can be particularly flexible in the production of short-run specialist parts, and low to medium volume quantities.

CNC injection moulding – Allen Brothers are experts in the use of advanced engineering polymers and composites such as carbon fibre filled acetals and nylons. 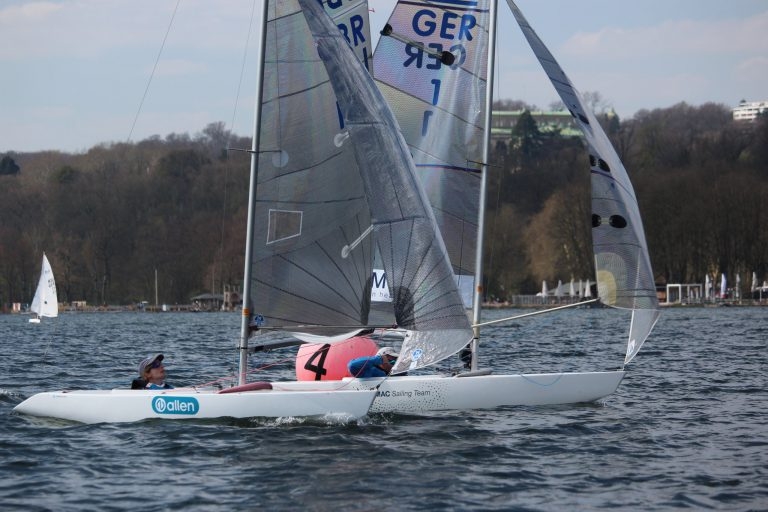 After a long winter mostly sailing a borrowed boat owing to my brother working some magic on mine it was time to start the season. The Ruhr City Cup is the ideal place to do it. A small crescent-shaped river with some interesting shifts but it makes the sailing fun.

It is always good to see what the German fleet has been up to over the winter and we spent a long time on Friday talking about this due to a complete lack of wind. Sitting in the sun chatting sailing, planning the next couple of years is not a bad way of spending a Friday. It beats sitting in the office.

As Saturday came the wind did as well, some of it anyhow. Five races in one day with a coffee break after 4 lead to a full on day. It’s always nice after the winter to find out how fast the boat is going and pleasantly mine was going fast enough. I had a great battle all day with Heiko Kroger a Paralympic and World Champion. Unfortunately, as you can see from the picture I was on the outside of too many leeward marks going into the finish. We both had to bow to a very fast local Dragon sailor Ben van Cauwenbergh, a Belgium living in Germany sailing under an American sail number.

Sunday the wind had gone 180 degrees so we weaved our way through the rowers for three last races. I was starting better but in the first couldn’t quite hold onto the inside at the leeward mark and lost to Heiko. Second race I couldn’t find the right shift to save my life but managed to find one that mattered at the top to lead and managed this time to hold it. This lead to the last race winner takes all. Heiko did a very nice job of covering me up the beat, I should have stayed close down the run but didn’t and could only get back to fourth. Every days a school day and we’ll try again.

It is a great little club at WSB Baldeneysee celebrating its 100th year. The race team was once again excellent as local sailor Stefan Giesen brings his team from Kieler Woche. It is the volunteers that make this event from the beer fridge to an immense amount of cake. An event structure that is almost uniqiue to the Ruhr City Cup that everyone should experience once in their life. As Ben wrote in the German report all together nice weather, wind, nice people, three days all you can eat and drink, and fun!! Sums up the weekend perfectly and a great start to the season. Very excited for the months ahead.