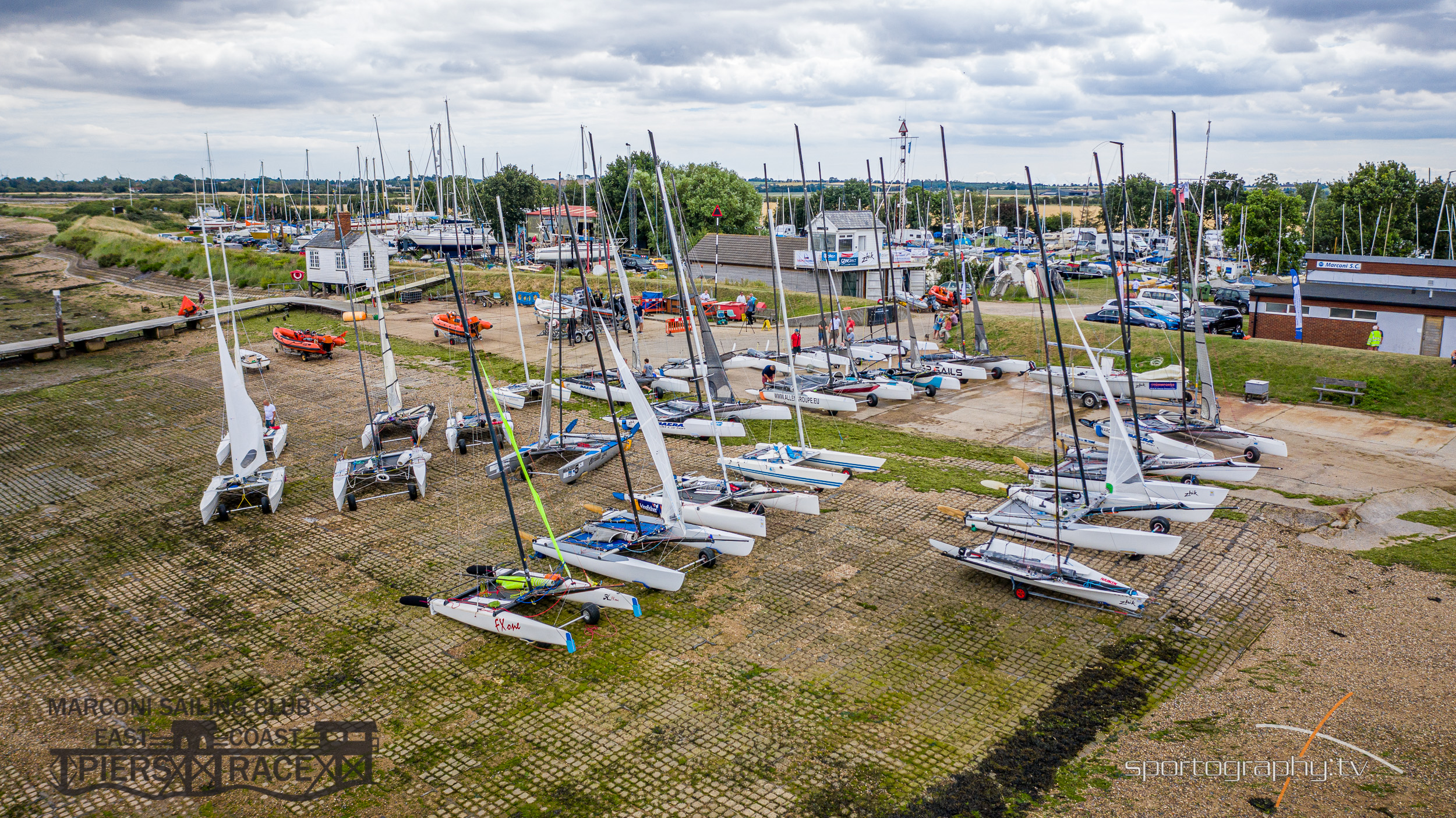 This year the AES showcased a wide range of conditions with each of the four long distance events experiencing varying wind speeds and sea states, ensuring each entrant got a good test of their sailing skills. Despite this, Simon Northrop of Minnis Bay managed to win two of the four events and after including one discard also takes the overall series win by just 4 points. Therefore, claiming a total of £700 worth of Allen vouchers.

Simon commented “We are pleased to have won the AES this year after finishing runners up in the first year. The series tests every skill from endurance to navigation and everything in between. We had some fantastic racing with the other competitors and we were hoping to take the Sheppey race to add to the other two wins in the series, but, we decided to sail over from Whitstable instead of trailing the boat and this was a bad call as we arrived late due to a light head wind and started 22 minutes late! We still managed a 6th overall, just 15 minutes behind the first boat, and we had a great blast chasing everyone down. The Sheppey race was the highlight of the series for me, despite this, as I last did this race in a Condor 30 years ago and it was great to come back again! 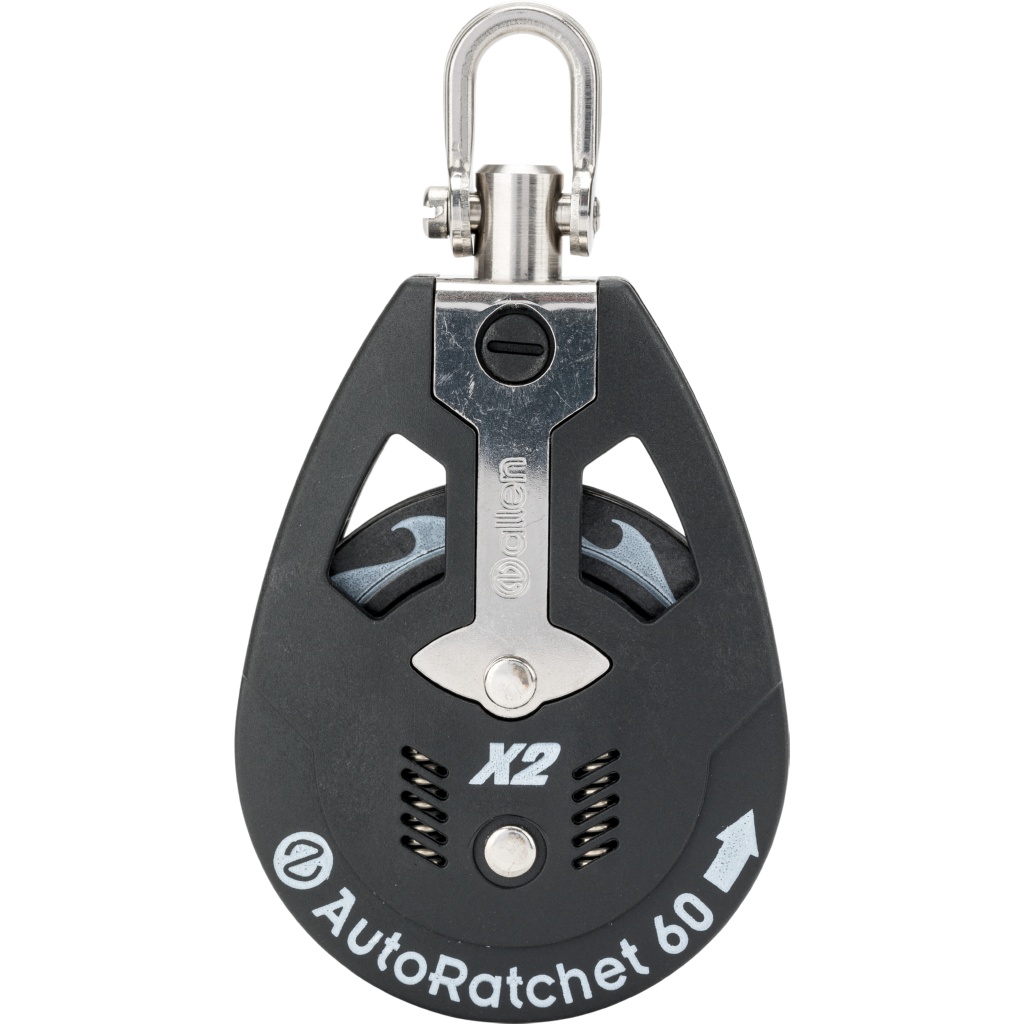 Introducing an additional option for our range of ratchet blocks, dubbed the Wave Ratchet, which will offer between 20 to 40%* more grip without adding any additional wear to the rope.

Ratchet blocks are a very important part of performance sailing and can give the sailor a huge reduction in fatigue, when used appropriately. The ratchet block works by increasing friction to the rope that is being trimmed. The more friction a ratchet block adds to the system, the easier it is for the sailor to hold onto higher loads.

But, by adding more friction to a system the rope ends up taking the brunt of the punishment and will wear out more quickly. Fine, if you’re a professional sailor and receive monthly care packages of rope.

The most effective way to increase friction is to add sharp edges to the ratchet sheave, but this quickly deteriorates and wears away the rope. So, after working alongside leading rope manufacturers the Allen design team came up with a simple solution which improves grip without chewing away at your expensive rope.

The Wave Ratchet sheave has an offset V style grip, made from a hard-wearing recycled plastic nylon, which does not have sharp edges that will eat into the rope. Instead, by adjusting the V formation in the sheave to be slightly offset, the ratchet now grips the rope at additional points around the sheave, resulting in more grip. However, the new Wave Ratchet not only improves grip but as a result of the design it also allows for a less ‘jumpy’ feel when easing the sheets.

We will be offering the new Wave sheave in both the 60mm Pro-Ratchet and X2 AutoRatchet blocks.

*Grip will vary depending on the type of rope in use with the wave sheave. 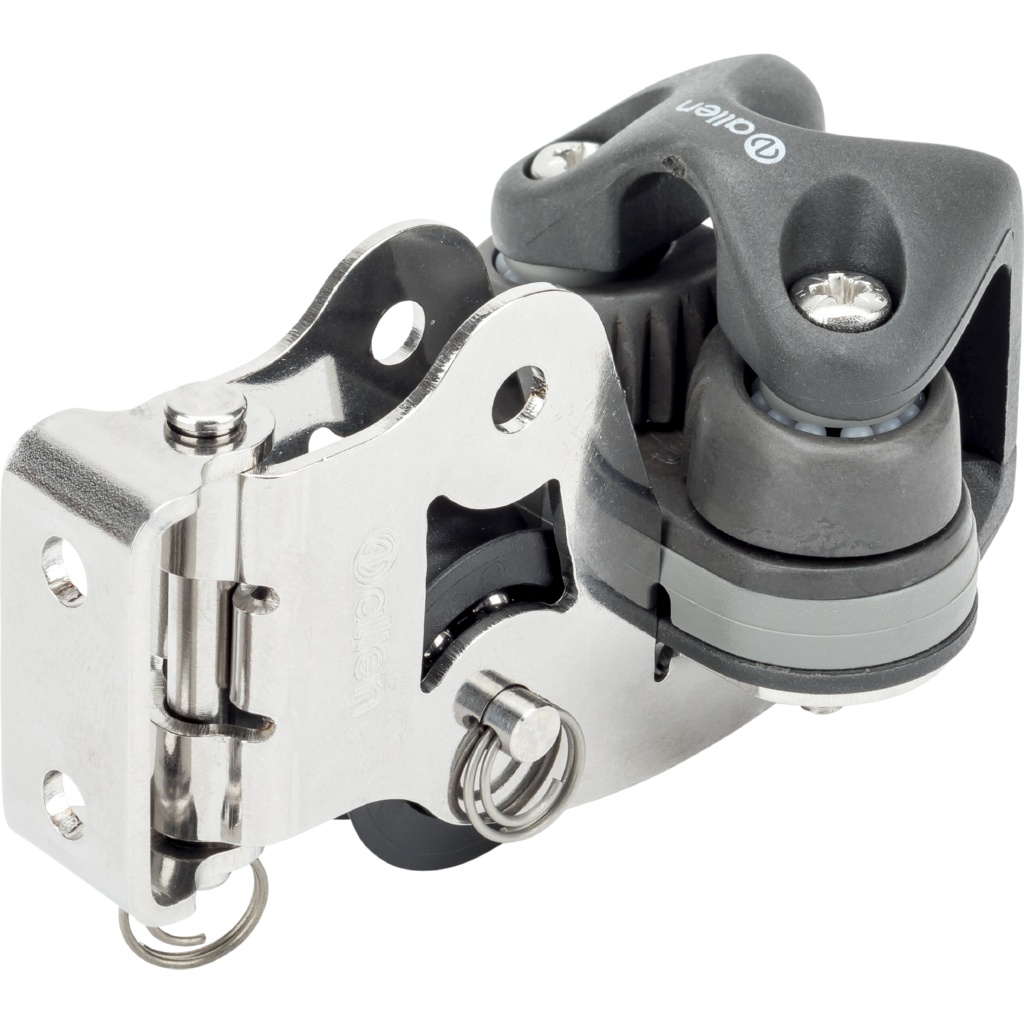 Upgraded and Flip-Flopping better than ever. The new range of stainless-steel flip flop blocks from Allen has been launched at METS this week.

The new range offers a redesigned body in two different sizes and incorporates a 20 & 30mm dynamic sheave. The new flip flop range also features a lighter yet sturdier body that can pivot through 180 degrees and is held in place by a removable clevis pin for easy access to the backing plate.

Allen Design Manager, Darren Elwell, commented “This new upgrade was well needed. Our existing range of flip flop blocks was well outdated and used far too much unnecessary material. By updating the design, we have not only cut down the material used to produce the product, but we have also made it stronger and lighter.”

The 30mm body is available with or without cleats and makes for a great choice for pole launching or halyard systems. 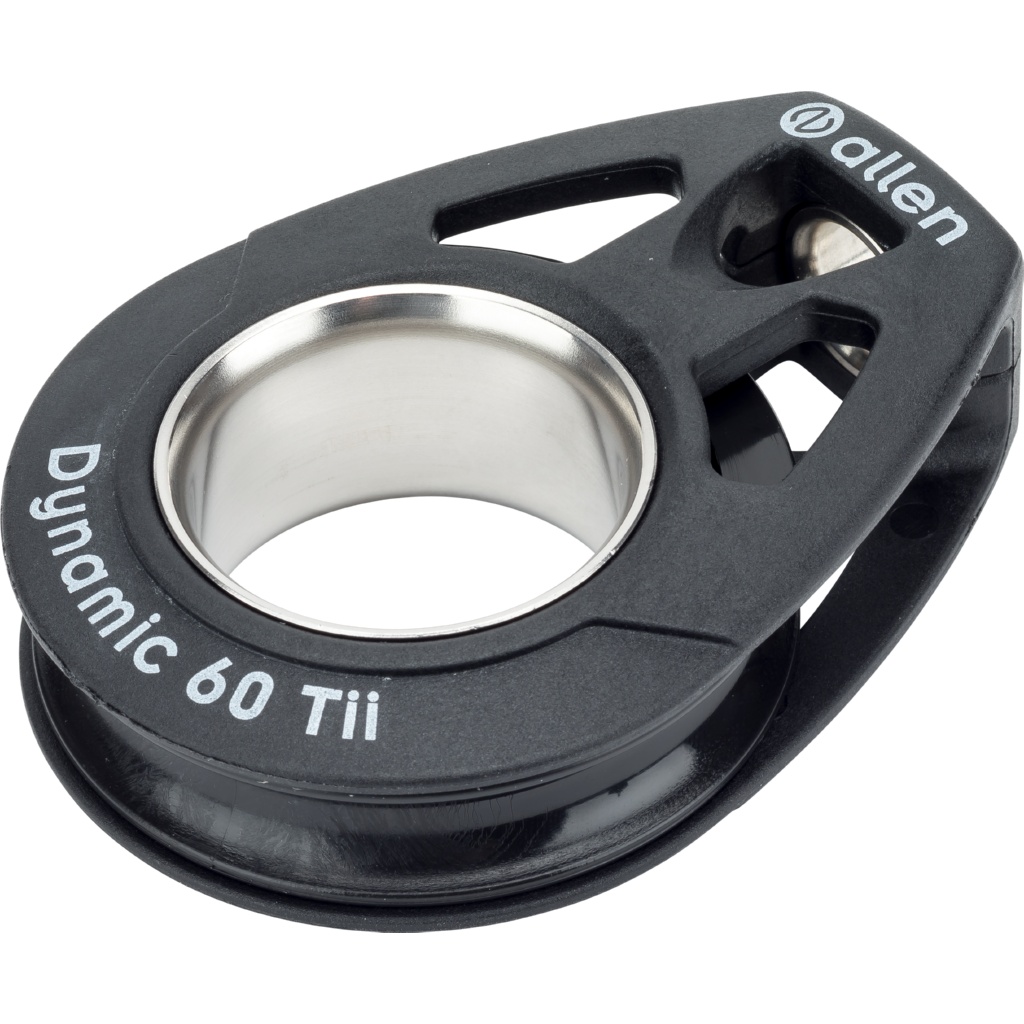 The popular performance range of Tii blocks from Allen has just gained a new addition, the long-awaited 60mm version.

Allen Tii blocks are designed for soft attachment applications. Ideal for use in systems where weight saving is a necessity, there is no requirement for a metal shackle or maximum performance is demanded.

Design manager at Allen, Darren Elwell, commented “This is another product in our extensive range that shows we are no longer only aimed at dinghy’s. Because the block can take standard working loads of 700Kg it’s a great choice for sheets or control line applications where weight saving is essential. After our extensive testing, the A2060Tii has become the block of choice for World-class boat builders in the International Dragon, Etchell and Development Mini classes.”

Allen Tii blocks feature a standout difference from their competition. A stainless-steel ring at the head of the block. The ring is designed to strengthen the block so that any cheek splitting loads are dissipated, allowing for higher working loads when compared to competitors tie on blocks in the same category.

To find out more visit the Allen website www.allenbrothers.co.uk

Maximum Working Load – The maximum load that the block will endure with the repeated sheave movement.

Breaking Load – The load at which a major failure is likely to occur. 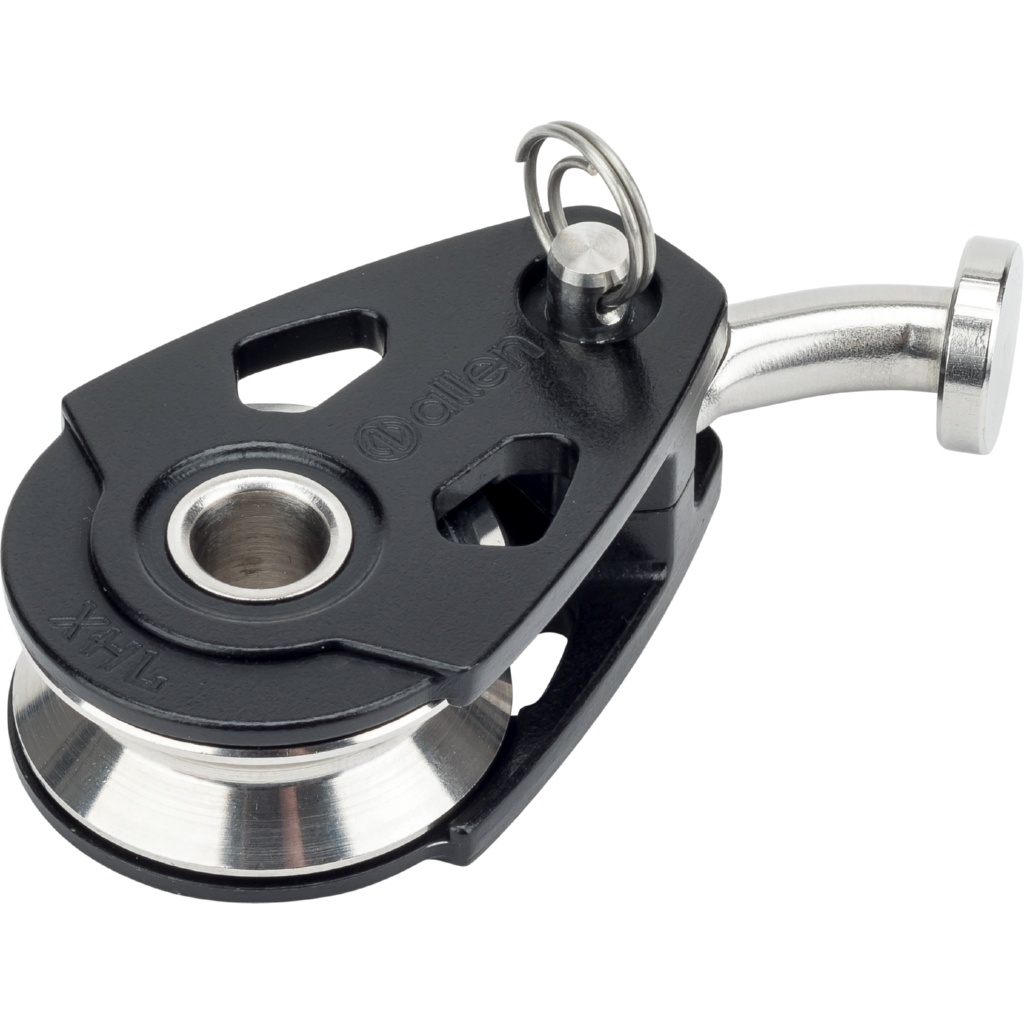 The block which features the same extreme high load dynamic bearing technology as the rest of the Allen XHL range has been specifically adapted to work as the Laser dinghy’s top vang block.

The XHL range was conceived when the Allen design team worked with the World’s top International Moth sailors to create a solution for the extreme high loads, they were putting through the vang.

More recently Allen has been working on feedback from top Laser sailors who are looking for a more efficient top block for their vang. It was inevitable then, that the Allen design team would use the tried and tested XHL block to solve the problem. By adapting the 30mm XHL block to incorporate a stronger vang key the Allen design team has come up with a solution that is not only capable of withstanding the Laser vang loads but also sleek and stylish.

Southeast Sailboats who specialise in providing world-class rigging for the Laser has been using the XHL block and commented:  “This extremely free running block makes pulling on the vang easier, and the stronger key will ensure that it will cope with the increased loads imposed by the Laser MkII rig. By integrating the vang key into the block the overall length of the block and key is minimised, thereby not compromising the overall vang operating range.  This great block will also help sailors who are currently struggling to pull on enough vang to depower the sail for the conditions, and in addition, make it easier for sailors who want to take a purchase out of the vang system.”